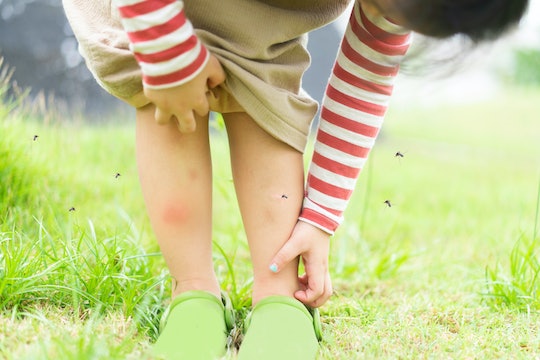 Here's The Deal With Toddlers & Growing Pains, According To Experts

I can still remember the discomfort of growing pains as an adult. That wake-you-up-at-night pain is hard to forget, especially because most experience it for years throughout childhood. It's most common in older kids, but you may start to wonder if your toddler can have growing pains after your four-year-old complains of soreness three nights in a row.

Despite how universal growing pains are, the name is a bit of a misnomer, as it turns out. Per WebMD, "there is no firm evidence that growing pains are linked to growth spurts." Kids can experience big increases in height without the pains, so it's not the growing that's making kids sore. "It has been hypothesized that most commonly they are due to muscle aches after strenuous daytime activity, which is supported by the fact that they frequently respond favorably to massage and stretching," Shannon Kelly, M.D., an Orthopedic Surgeon and Sports Medicine doctor for the Children' s National Health System, tells Romper via email. So normal kid behaviors like running, jumping, or climbing can make your kid sore, and we just call them growing pains.

Because the pains are most likely caused by strenuous activity, growing pains are more common in older children who can walk and run steadily. Toddlers are still getting the hang of that stuff (hence the word toddling), so it's less likely they will experience growing pains. But it is possible, and Kelly points out that the pains are "most commonly seen in children between the ages of 2 and 12, although [they] can persist up to skeletal maturity, although not beyond." Kids are considered toddlers between the ages of one to three, so it could be growing pains causing your little one discomfort.

But because growing pains aren't as common in toddlers, it's important to be sure that's actually what your little one is experiencing when they complain of muscle pain. "The key features of growing pains are that they most commonly occur in both legs (although not necessarily at the same time), are migratory, occur most commonly during evening or nighttime hours but do not affect play, and are frequently improved with massage," says Kelly. Heat and ice will also alleviate the pain, and you can add preventative stretching into your routine to prevent them, too. The sensations that your toddler will feel don't differ from the pains older kids get, according to Healthline: "Growing pains in toddlers are the same aching and throbbing as in older children," the website reported.

If your child's pain is accompanied by swelling, fever, and doesn't improve with rest or massage, you should have a doctor check them out to make sure they're just experiencing normal soreness. Kelly says you should also look out for "pain that is unilateral, pain that is consistently pinpointed to the same area, or pain that prevents children from playing," as those could all be signs of something more serious. You can never be too careful with your kiddo.

But more likely than not, new complaints from your toddler about leg pain will just stem from increased activity. Their little bodies aren't used to active play, so it makes sense they'd have some discomfort. So invest in a heating pad, join your kiddo in some morning stretches if you know they're going to have a busy day, and work in some rest time when they need it. They'll be just fine.