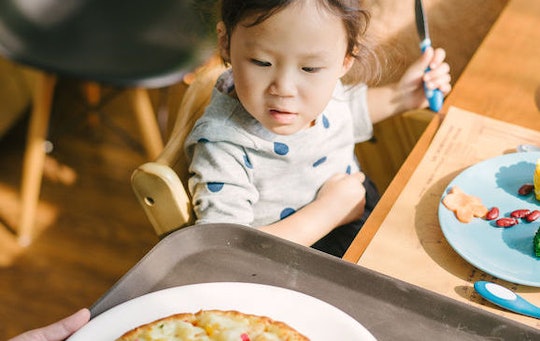 Your Tot's Extreme Picky Eating Isn't An Eating Disorder, But It Could Be This

Trying to get a stubborn toddler to eat can be incredibly frustrating for a parent. When it seems like there's hardly anything your child will agree to eat, it's understandable to start worrying about what's going on. Your mind might naturally leap to the worst case scenarios, wondering if your mealtime battles could mean that your toddler has an eating disorder. Experts say that term likely wouldn't apply at such a young age, but there are other issues you'd want to examine to get to the root of the problem.

Carol Elliott, founder of the Pediatric Feeding Institute, agrees. "In an eating disorder, it’s not that they don’t like certain foods or can’t chew their food. It’s deeper. It’s psychological issues with body issues or anxiety, or a variety of different issues," she says. "Eating disorders [are] anorexia, bulimia... That's not the same thing if you're looking at a picky eater who's a toddler," she says. While it's likely beyond a toddler's developmental grasp to be dealing with those sorts of issues, Dr. Jacobs says they could emerge when children hit school age and start to encounter bullying and body shaming. "Children can unfortunately say a lot of really mean things to each other," she says.

If sensory issues rather emotional issues are behind your child's resistance to eating, you may be dealing with a feeding disorder, not an eating disorder. They sound similar, but they're very different things. Throwing tantrums over meals, difficulty dealing with certain textures, refusing solids or liquids, and refusing food groups can all be warning signs of a feeding disorder in a child, according to the Kennedy Krieger Institute. The tricky thing about it, however, is that every parent of a toddler has probably experienced all of those signs at some point. That makes it really tough to differentiate between standard toddler behavior and a more serious issue. When your toddler doesn't eat enough food to gain weight and maintain their growth, however, you're probably looking at something much more serious than standard picky eating.

Complicating matters even further for a parent is the fact that you can be dealing with a feeding problem even if you're toddler's weight isn't a concern. It's cause for concern "if they're dropping foods, they're brand specific, they're texture specific, they're not eating foods from all the food groups that they need to be," says Elliott.

If you can't tell what's normal and what's not, you're definitely not alone. "I think it's a hard call for parents, it's like, 'Am I being paranoid? Am I overthinking it?'" But if you're concerned, Elliott says it's always better to err on the side of caution. "If you're ever having a strong mommy gut feeling something's not right, usually that's what you need to listen to." No matter sort of issue with food your child might be experiencing, the earlier you can address it, the easier it can be to correct.