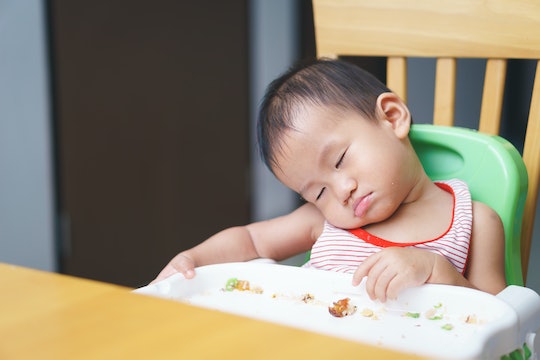 Hoping Thanksgiving Dinner Will Put Your Kids To Sleep? Here's What You Should Know

Putting your kids to bed can be tough sometimes. You can try reading all the books you want, giving warm baths, and singing lullabies, but sometimes they just don’t want to sleep. So as a parent, you're always on the lookout for new tips and tricks on getting your child to sleep. When you remember how tired you are every Thanksgiving after all that tryptophan, it makes sense to wonder — can turkey help kids sleep?

Romper reached out to Pennsylvania pediatrician, Dr. Jarret Patton, for answers. Patton says that while there maybe a relationship between turkey and sleep, it probably won’t help put your kids to bed. “Although science has linked chemicals in turkey to sleep,” explains Patton, “you won't notice a difference in your child's sleep pattern after that turkey meal because they simply can't eat enough of it.”

The link between turkey and sleep that Patton is referring to is all in the amino acids it contains. According to Kids Health, turkey meat has a significant amount of L-tryptophan, an amino acid that travels in your blood from your digestive system to your brain, where it then turns into serotonin which calms you down and relaxes you enough to sleep. But the reason eating turkey can’t really help kids fall asleep, explained Kids Health, is that L-tryptophan will only work as a sleep inducer when there are no other amino acids taken with it, and turkey has lots of other amino acids.

In an article in Scientific American, neuropharmacologist Richard Wurtman explained that turkey has plenty of amino acids, and L-tryptophan is relatively small in amount. He further noted that these other amino acids take center stage, and don't really allow L-tryptophan to makes its journey to the brain. He added that if you were to take L-tryptophan by itself, it could increase serotonin in the brain, causing a sleepy effect, but there is no food source that can provide that circumstance.

So if it’s not the turkey, why does Thanksgiving dinner make you feel sleepy? For Thanksgiving dinner, yes, you gobble up lots of turkey, but you also end up eating a lot of other rich, heavy foods with it. According to Self, when you eat foods that are higher in carbohydrates, like potatoes, breads, and stuffing, you can cause your blood sugar to spike, which eventually leads to a blood sugar crash. The article explained that when you eat all that heavy food, your body has to work extra hard to digest it, and that can end up draining your body of energy. So you can’t really blame that food coma on the turkey alone.

Although, according to Today’s Parent, there are some foods that may help your kid fall asleep easier. The article suggested that if you serve breakfast foods at dinner time that are a combination of protein and carbs (much like Thanksgiving dinner), including oatmeal and milk or toast with peanut butter, these foods can form amino acids that act like L-tryptophan. They further suggested that foods like bananas, eggs, tuna, and cheese may also help your child fall asleep. I guess you could even make a mock turkey dinner, like mashed potatoes and turkey, which may be rich enough to induce a kiddie food coma.

But the safest bet is to keep a good bedtime routine, as hard as it may be. Sleep aids, food related or not, are only temporary fixes. Certified sleep consultant Christine Stevens of Sleepy Tots Consulting tells Romper that consistency is one of the most important parts of a good, healthy bedtime routine. "Whatever your bedtime routine is," Stevens suggests, "make sure it’s consistent and at the same time every night.” I know it sounds easier said than done, but for all parents, the bedtime struggle is real, and I’m sure a turkey dinner every now and then can’t hurt.

More Like This
Is The Hatch Baby Sound Machine Worth It? This New Mom Says Yes.
Baby-Led Weaning: A Comprehensive Guide To Introducing Solids
What Is RSV?
The Best Halloween Family Pajamas To Match Your Boos