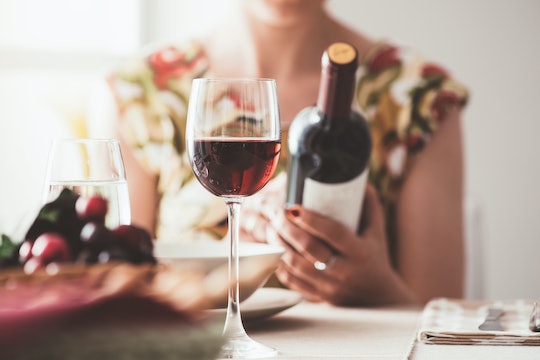 Can We Please Just Let Mom Enjoy Her Glass Of Wine?

Almost every day I see ads for wine-themed products on social media, and almost all of them are geared towards moms. From snarky t-shirts to glassware, moms seem to be the key wine-drinking demographic. Then there are the memes, blogs, and mom groups that all send the same message: moms love wine. It's been suggested that these products and groups are dangerous, and perpetuate a binge-drinking culture that ultimately hurts parents and non-parents alike. But, guys: can we just let mom enjoy her glass of wine? And before we take away yet another thing she can enjoy that has absolutely nothing to do with her children?

A recent article in The New York Times labeled mommy wine culture as a symptom of widespread addiction, actually going so far as to compare it to the opiate crisis. And according to the Centers for Disease Control and Prevention (CDC), one in six U.S. adults binge drinks about four times a month. A lack of mandatory paid family leave, affordable childcare, equal pay for equal work, and high rates of postpartum depression have left many moms feeling desperate and in need of a coping mechanism. In a 2014 Today.com survey, 40 percent of participating moms said drinking helps them cope with the stress of being a parent, and more than one-third said they "have mom friends who they think have a problem with alcohol."

I am not refuting this evidence, or suggesting that binge-drinking isn't a problem in our culture. I am not arguing that we dismiss the prevalence of alcohol addiction, or overlook any red flags that might suggest a mom is struggling and relying on alcohol to "survive." I'm not saying we shouldn't support moms in a variety of ways that have nothing to do with alcohol, so perhaps we all wouldn't want that glass of Chardonnay at the end of the day.

What I am saying, however, is that there's nothing wrong with joking about "needing" a glass of wine. I am saying that the mom who enjoys a glass or two of Pinot Noir isn't perpetuating alcoholism or binge-drinking, but is simply treating herself to a well-deserved beverage. And what I'm arguing is that we can take accounts of drinking to excess seriously, and allow moms the freedom to enjoy their alcoholic beverages without attempting to police what goes into their body, at the very same time. Faux outrage and faux concern aren't going to help anyone, but it will shame moms into feeling like, once again, they can't do a single thing for themselves.

Dads can enjoy alcoholic beverages without it saying something about their parenting, apparently, while moms are held to another unreasonable standards that makes even the mention of wine look like a potential drinking problem.

I know I didn't start enjoying wine because of jokes I read on the internet, or as a result of cleverly marketed wines with "mommy" on the label. I legitimately love wine, and not as a recreational drug or an attempt to self-medicate myself into oblivion but as a hobby, a special interest, and yes, a way to unwind after a long day of work and caring for my kids. I'm an adult, and as an adult I have the freedom to imbibe when and where I see fit. And, as an adult, I would hope people around me would trust me to do so responsibly. After all, I am taking care of other human beings 24 hours a day, seven days a week, 365 days out of a very exhausting year. I can handle a glass or two of wine.

While I understand the need to address our country's infatuation with binge-drinking, I cant help but feel like we're collectively infantilizing moms when we talk about the prevalence of "mommy wine culture." Our male counterparts joke about it being "5:00 p.m. somewhere" and are free to indulge in a beer at the end of a long day of work without constant criticism. I've worked in male-dominated workplaces where having a drink at work was common-place and even encouraged. Dads can enjoy alcoholic beverages without it saying something about their parenting, apparently, while moms are held to another unreasonable standards that makes even the mention of wine look like a potential drinking problem.

According to a study published in the journal Social Science & Medicine, moms actually tend to cut down on drinking after having kids. And in countries like France and Italy, where drinking wine is a huge part of the food and family culture, binge-drinking and alcoholism are actually less of a problem for both adults and young people, according to The New York Times. There's a whole stack of studies linking moderate wine consumption with positive health outcomes, too. So, what is it that makes people in the U.S. express so much so-called concern over moms and their wine consumption? Why do so many people raise an eyebrow when I tell them that I vacationed in Napa County or got a wine club membership for my birthday?

If we trust women to raise the next generation of children, we should trust parents to be able to responsibly enjoy an alcoholic beverage at the end of a trying day.

I think part of the problem is the undeniable fact that we live in a culture that still, for the most part, believes women shouldn't be allowed to make their own choices about their own bodies. When women are pregnant we police what they consume, and when they're postpartum (and especially if they're breastfeeding) we monitor what they eat. Politicians are attempting to legislate a woman's right to choose whether or not to remain pregnant, so it should come as no surprise that so many people feel perfectly fine telling moms how much wine they should or should not be drinking.

Do we need to look at underlying societal inequities that cause moms to feel like they need a drink at the end of a long day? Absolutely. Do we need to provide affordable access to things like mental health care, medication, and child care, so moms have everything they need to cope with things like postpartum depression, anxiety, and addiction? Hell yes. Do moms need more time and space for the self care they deserve? Of course, and I'll drink to that.

But we shouldn't assume that a mom has a drinking problem or judge her endlessly simply because she enjoys a glass of wine or two. We shouldn't feel free to suggest that moms shouldn't drink at all, simply because they're moms. If we trust women to raise the next generation of children, we should trust women to be able to responsibly enjoy an alcoholic beverage at the end of a trying day.

Motherhood is hard. Let mom enjoy her glass of wine. She deserves it.

More Like This
Experts Explain Whether It’s Safe For Your Baby To Sleep On Your Chest
Zaya Wade Is Rocking New Long Hair & As Gabrielle Union Put It, She's A "Vision"
Introducing My Boyfriend To My Kid
13 Nursing Bras & Pumping Bras You'll Actually Love To Wear