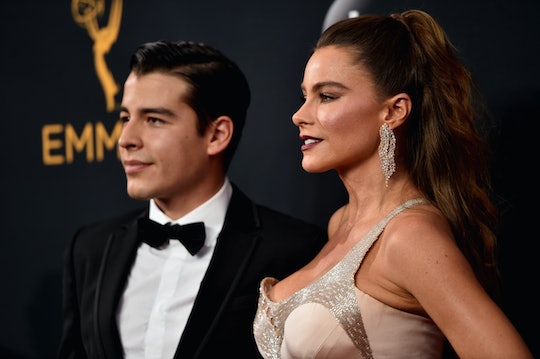 Sophia Vergara of Modern Family recently posed nude for the cover of Women's Health. She's been lauded on social media for the courage it must have taken for her to bare all at the ripe old age of 45. Let's give Vergara full props here: in an industry obsessed with youth and perfection, it probably didn't feel like an easy choice for her to go naked. Especially when our society seems hell-bent on praising women based solely on their physical shells. But let's stop pretending this sort of "bravery" talk when a non-professional model woman poses naked is anything other than back-door body shaming. We need to stop calling celeb moms brave for taking off their clothes.

Why don't we call Victoria's Secret models brave for showing their skin? They are just as naked — if not less so — than Vergara was in her photoshoot. It's pretty straightforward: we don't call them brave because Victoria's Secret models represent the gold standard of beauty, defined by someone, somewhere, I suppose. They are deemed flawless, and therefore it's a gift to those of us out in the world with eyes when they decide to share their physical perfection sans clothing. (And they are beautiful — I'm not shaming them.) But when a non-professional model woman — aka, the average woman — chooses to take off her clothes and we call her brave, what we're really saying sounds something like this:

You are not the gold standard. You are not the ideal. Your nudity must be making a statement about body acceptance, and so we will call you brave and congratulate you for sharing images of your sub-par physical being even as we criticize you subconsciously.

Vergara credited Women's Health with making strides towards body acceptance, telling the magazine in an interview:

Here’s a woman, 45, being able to show her body. It’s not like before, when it was just young girls who would make the cover of a magazine.

Because, since "her boobs are real and she's had a baby," it was a real leap of faith to put her on the cover of a magazine, or so the thinking goes. And to be completely fair, the industry is moving in the right direction; less retouching, more "real" women on the covers of magazines. Which is why it's so unfortunate to refer to women as brave if they do stand up and demand to be truly seen as they are in this moment.

This isn't the first time a celebrity has been called "brave" for going naked; in 2016, comedian Amy Schumer and other celebrities posed semi-nude for the famed photographer Annie Liebovitz to support the annual Pirelli calendar. Schumer's stunning photo went viral... and people called her "brave" for baring her body. And now here's the part where social media users fat-shame Schumer and debate about whether her size is "acceptable," as if that's the point at all.

The point, my friends, is that the world we live in places far too much emphasis on whether or not the male gaze deems a woman attractive. In Schumer's case (as a myriad of internet trolls would be frothing at the mouth to tell you) some horrible men out there don't find her attractive. So for her to show her body when it's already been voted off the island of (terrible) men probably does feel brave to some people.

During an awards show in November, Schumer called out the manipulative nature of being a "brave" woman with a normal body. According to The HuffPost, Schumer said:

This is where I get really ‘brave’ as everyone said after my Annie Leibovitz photo. That’s what you want everyone to say when a naked photo of you goes viral. You want them to say, ‘What a brave photo.’ You’re like, ‘Thanks, wow, thank you.’

Other celebrities have spoken out about the universal back-patting that goes on when a non-professional model woman wears a bikini. Here is how Ashley Graham, plus-size super model and fashion designer, reacted to being called "brave" for wearing a bikini: she shared this photo of herself on Instagram and captioned it,

And there's a flip side of that bravery coin as well, which indicates just how damaging the bravery language can be when it's not used for a woman posing nude. When mom of two Kim Kardashian-West shared a nude selfie, she certainly wasn't called brave. In that case, she was called a bad influence for young girls and slut-shamed for posing nude — by other women, no less. It seems there is a threadbare line women must dance when it comes to body positivity; too sexy isn't OK, and too real isn't either.

Sophia Vergara isn't brave for posing nude. Neither was Amy Schumer. It isn't brave to wear a bikini to the beach — it's a fashion choice. We need to stop trying to define how women should measure the way they feel about their bodies — and also stop using their bodies as a form of measurement for their personal growth throughout their lives. Posing nude is not easy, I'm sure. And doing it when you have a body that society doesn't deem great says a lot about a person. But when we start to ascribe bravery to those who pose nude — only when they have a certain body — there's a problem. Especially when those bodies are also moms' bodies.

We're probably all a little bit brave some of the time. Raising humans? Brave. Carving our own path in the world? Brave.

Having a body? Not brave.