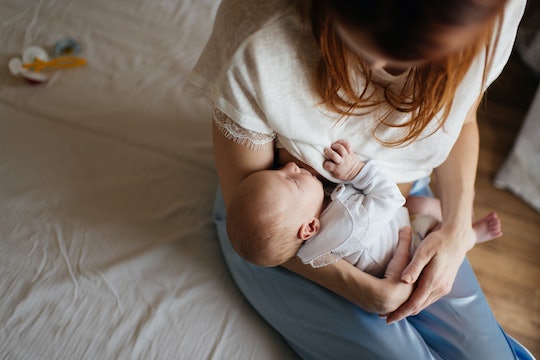 If You Have Strep Throat, Here's What You Need To Know About Breastfeeding

I seem to get strep throat at least once a year. It starts as that vague tickling in the back of my throat that just signals doom. Then, it gets worse, and there's the awful itch behind my tonsils that won't quit. Soon, I'm feeling feverish and can't swallow or speak. The only thing I can eat is soup and hot tea. This is normally just annoying, but sometimes, it can be worrying, like if you're pregnant or breastfeeding. Can you breastfeed if you have strep throat, or is there a risk of transmission to your baby? Will it affect your milk?

It is very rare for a mother to need to stop breastfeeding due to illness. According to The Pediatric Clinics of North America, the only two diseases which are absolutely incompatible with breastfeeding are HIV and HTLV-1, which is a retrovirus of the human lymphotropic virus family. Strep throat is a common bacterial infection caused by streptococcus pyogenes bacteria, and it causes a sore throat, rash, fever, and other uncomfortable complications. While it is sometimes treated with antibiotics if the body fails to combat the infection itself, according to Chemotherapy, most antibiotic regimens do not require the mother to stop breastfeeding while she's taking the course of antibiotics.

According to the Mayo Clinic, strep only rarely leads to a more severe, systemic reaction like Scarlet fever, rheumatic fever, or an inflammation of the kidney. In those cases, it may be required of you to stop breastfeeding for a period of time to minimize risk to your baby. Also, if you have a condition which leaves you immunocompromised, like rheumatoid arthritis or lupus, your body may be affected more strongly than those of typically healthy mothers, but, according to the Lupus journal, that does not necessarily prevent you from continuing to breastfeed, even if you're in the position of needing to add a steroid (like prednisone) to your treatment.

I spoke with maternity nurse and board-certified lactation consultant Elizabeth Mason of New Jersey, and she tells Romper, "Unless you feel like you physically can't do it because you're so miserable, which is valid, you can continue to nurse your child while you have strep." She says it's important to maintain proper hygienic procedures, like showering well, washing your hands before you pick up your baby, and cleaning surfaces in your home. "If you're also coughing, you might want to consider a mask, but just while you're breastfeeding. Strep is highly contagious."

Mason says that breastfeeding is actually really helpful in preventing the spread of the virus to your child, adding that "those antibodies your body is producing to fight off the bacteria make their way into your milk and into your baby." She says that yes, it is possible that your child might become sick, but it's unlikely due to the antibodies they're receiving from your milk, and also just the structure of their tiny throat and tonsils. "This is one of those rare cases where smaller is better when it comes to illness. Tiny tonsils don't have a lot of surface area for the bacteria to cling to and colonize."

This nugget of wisdom made me think that I must have tonsils relative in size to my 6-foot frame due to how often I get the stupid disease. Thankfully, my babies were mostly average in size. This hasn't lasted, but at the time they were perfectly average. Mason tells Romper that if you weren't breastfeeding, your children could still get it just by being in proximity to you in your home and they wouldn't have the added benefit of the antibodies in your milk to help protect them. "Just try to stay hydrated so your supply doesn't dwindle. It's painful to eat and drink, but do your best." Does Campbell's soup still sell those sippy cups of chicken noodle soup? I'm thinking those could kill a few birds with one stone.

In the end, do what you and your doctor feel is best for you and your child, or what you're comfortable with. If you feel like a zombie and need a break, tell your doctor that. It's more important that you heal.

More Like This
Please Stop Telling Moms To Breastfeed As Baby Formula Shortage Worsens
Reddit Is Stunned By Mother-In-Law Trying To Breastfeed Her Granddaughter
These 4 Sleeping Positions Will Keep You Comfortable After A C-Section
A C-Section Actually Doesn't Take As Long As You Think, According To Experts