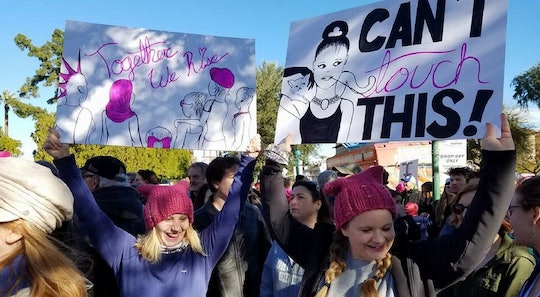 Can You Bring Bottles To The 2018 Women's March? Each City's Got Its Own Rules

Roughly a year ago, millions of women gathered together in their pink pussy hats to make the Women's March in 2017 the absolute awe-inspiring, history-making march that it was. So it's no small deal that the Women's March is returning with the very important goal of getting new voters registered everywhere. But how does the march work for moms with babies and toddlers, especially if your checklist consists of bottles to feed your little one? Can you bring bottles to the 2018 Women's March? You might seriously be contemplating, and you're right to, because rules vary by city.

This year, there are some cities with pretty strict rules while others don't have a glaring policy at all, especially not against bringing bottles. Some of the common items you'll need to avoid in most cities include umbrellas, oversized bags, and items for sale. But when it comes to whether or not you can bring your baby's bottle, it's important to know what you're getting into beforehand because you don't need another reason to protest once you get there.

Luckily, it is a women's march, and most cities seem pretty understanding and plausible when it comes to what you can bring and what you can't — even in the cities with the strictest rules. Below is a list of some of the bigger cities and it's major policies to help you plan accordingly. Of course, whichever march you plan on attending, make sure to take a look at the city's Facebook page or website in advance.

More Like This
17 Pictures Of Positive Covid Test Results
15 Holiday Decorations Costco's Already Selling
Here’s How To Keep Your Baby Safe When Their Older Sibling Is Sick
When Is Thanksgiving? All About Turkey Day 2022