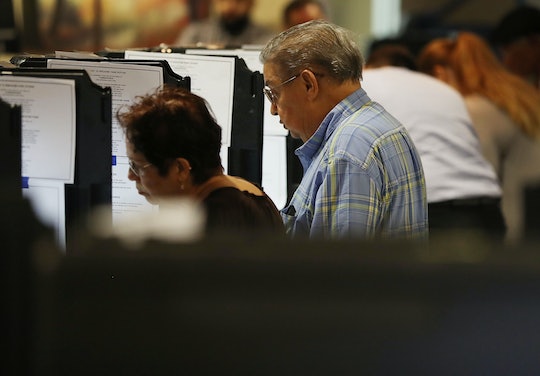 Can You Change Your Vote, Once Your Ballot Is Cast? It's Complicated

The last week of this election cycle is going to be a rollercoaster ride of unearthed scandal after scandal for each candidate and while we all try to not to vomit, Americans should really be thinking about the early voters who began casting their votes in October. With all the new, possibly controversial information about each candidate in the back of everyone's minds, it's no surprise that many are now asking the same question: Can you change your vote once it's cast? Oh, man, am I sorry you asked. Seriously, I am, because it's crazy complicated, and in some states you can change your vote. And given the FBI's announcement that there might be more emails to add to the the Hillary Clinton investigation and leaked tax documents from Donald Trump that show he paid pretty much no taxes back in 1995, it's a really good question and I feel your pain.

This election has been powered by independent voters, or voters voting outside of their party, or just voters who want to do the right thing but feel really, really icky about it. When you throw in early voting in some states and a slew of scandals surrounding each candidate, it's hard not to change your mind every time you change the channel.

Republican nominee Donald Trump has been using this kind of indecision to his advantage, reminding voters in Wisconsin on Tuesday who might have made it to the polls already, that they can change their vote up to three times.

Here's the deal: you can change your vote in Connecticut, Michigan, Minnesota, Mississippi, New York, Pennsylvania, and Wisconsin. That list also includes states that don't have early voting (like New York, for example). In the states that allow it, you have to be an absentee or early voter. What's even more confounding is that while it's allowed, the rules and procedures are buried deep in each state's election and voting rules. So voters should check with their election boards for the proper way to enact their right to buyer's remorse.

It has always been the law that a voter has a right to obtain up to three ballots. Typically, that happens at the polling place if the voter realizes they made a mistake in marking the ballot. They can tear up their ballot, spoil the ballot and request a new ballot at the polling place. That right is also available for absentee voters.

The states with rules about changing your vote have them mainly for making mistakes. Like you drank too much wine, the baby was screaming, and you filed an absentee ballot in a daze and woke up the next morning realizing you actually mailed it, Dude Where's My Car-style.

What Trump said today in Wisconsin is very strategic and very on-brand. He's sowing doubt in the system. First, he claimed that the election was rigged and was concerned about voter fraud. Then, when FBI director James Comey wrote to Congress last week about possibly looking into the Clinton email investigation again, he claimed that the system might be working. Now, he's urging supporters to check with their election boards to take back their early votes for Clinton (though anyone at a Trump rally most likely did not vote for Clinton).

According to CNN, it's rare that voters actually change their vote. Probably because there are only 7 states that allow it and those that do make it hard to do, because, let's face it, it messes with everything. But then again, it's totally legal in those 7 states and you have every right to request a new ballot.

If Trump were really worried about voter fraud, one could assume that encouraging a state of voters to cast and recast ballots would lead to more fraud. Or at least more mistakes. According to Wisconsin election officials, the state Trump encouraged today, it's rare that voters change their vote. Trump's a businessman and as any manager worth his salary knows, training staff on new or rare procedures can lead to lots of hiccups. That's management 101 stuff. For a candidate with so little faith in the American electoral system, it's a bold order.

In the immortal words of Deniece Williams, let's hear it for the boy. In this election season, Donald Trump has taught America some major civics lessons. First, it was a contested party convention. Then, everyone wanted to know how a party could replace a candidate last minute, and now, everyone is learning about buried voter rules in some states that allow you to make a typo on your ballot. Who said politics was boring?