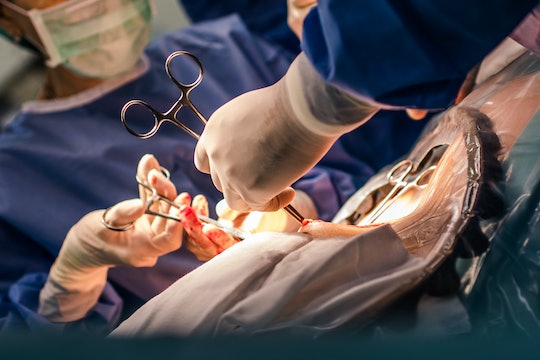 Here's What Happens If You Want To Delay Cord Clamping, But Need A C-Section

There's a lot happening when you have a cesarean. Whether it's a planned C-section or an emergency, it's an intense situation. There's a veritable ballet of nurses, doctors, and equipment floating around you, and it's probably a bit overwhelming. If you had a birth plan, you might have discussed delaying the cord clamping for a period of time after delivery, but how does this change in a C-section? Can you delay cord clamping during a c-section?

Why would you want to delay cord clamping to begin with? The umbilical cord is a really interesting, complex structure that provides nourishment to your baby as they develop inside the uterus, and this doesn't stop immediately with delivery. According to Evidence Based Child Health, the effects of delayed cord clamping are many and great. Delaying the clamping leads to the infant having a higher concentration of hemoglobin — the oxygen rich part of your blood — and also is related to a better birth weight, blood pressure, and body temperature.

It stands to reason that in a cesarean situation, these effects would be just as beneficial, if not more so, than delaying cord clamping during a vaginal delivery. But they do sound a bit more complicated in terms of sheer logistics. It makes you curious — can you delay cord clamping during a C-section? Or is it really just too busy for all of that?

It's important to know that delaying cord clamping isn't without risk. According to the same study, there is a 2 percent increased risk for your baby developing jaundice and requiring photo therapy. (Or as I like to call it, Bronze Babies Newborn Tanning Salon.) The risk of complications beyond that, however, weren't even notable enough to be mentioned in literature.

Cord clamping is very different from a "lotus birth," which often comes up in the same conversation. A lotus birth is when you leave the entire cord and placenta attached until it falls off. Yes, that means that you have to carry around your baby's cord and placenta for what could be days. The cord will dry up, and the placenta rots. It's a dangerous practice that doctors warn against, citing risk of idiopathic hepatitis, septicemia, and seizures in infants that remain attached to decomposing tissue. Cord clamping doesn't mean the cord goes for days without being clamped, it's just delayed for a literal minute, so that it has time to finish pulsing the remaining blood and nutrients into your new baby.

I spoke with an obstetric operating room nurse, Emmie Minor, CRNA, from Illinois about the procedure, and whether or not it can be replicated during a C-section. She tells Romper, "Our hospital's policy mandates the practice. While that's not the case everywhere, it's quickly moving in that direction." She says that in the case of preemies, especially the very small preemies born between 28 and 32 weeks, the case is even stronger.

"The teeny ones have their cord milked, much like how you would a cow, if you can believe that. It's fascinating to watch." Research shows that preemies who have their cord milked as opposed to a simple clamp delay have even higher and better hemoglobin rates, they keep their heat more evenly, and their blood pressure isn't as given toward dips and spikes.

When you're seeking out an obstetrician or you're in your prenatal visits, it's important to ask them what their policy is regarding delayed cord clamping and C-sections. The American College of Obstetrics and Gynecology (ACOG) supports the universal adoption of this practice in hospitals across the nation, but not all are on board yet. While there may be instances where the baby or mother is in distress and it's simply not feasible to do so, it is possible in most other cases, according to ACOG. Being informed is half the battle, as ever. Know the literature and you and your doctor can make an informed decision.