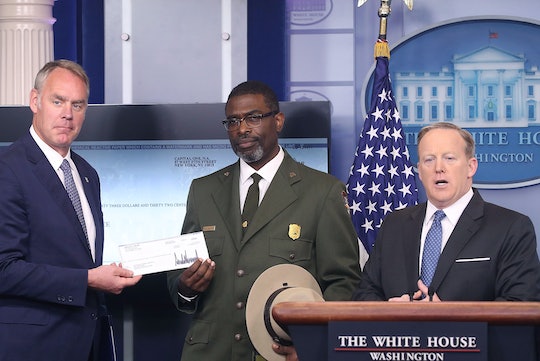 Can You Actually Donate To The National Parks Service?

Donald Trump has had more than a few problems making good on some of his campaign promises, like repealing Obamacare right away or instating a travel ban on Muslims. But on Monday he was finally able to follow up a campaign promise with action: Trump donated the first three months of his presidential salary to the National Parks Service. Which sort of begs the question — should we all be donating to the National Parks Service (NPS)? Are they in that much trouble?

Sort of. The president's proposed budget plan would cut funding for department of the Interior by 12 percent, which comes out to about $2 billion. When you put it that way, the department might prefer a revised budget including more than Trump's $78,333 donation on Monday.

A revised budget likely won't be coming anytime soon, but if you're worried about the parks and have a few extra bucks there are ways you can help out, too. There are lots of ways to donate to the NPS. You can choose your favorite park via an interactive map and donate directly to your local park. You can also donate to the National Parks Foundation, which is a Congressional advocacy group for national parks (though that money doesn't necessarily go to the parks themselves). There is also parks bookstore you can purchase books from that funds the foundation and many "friends of the NPS" organizations that you can support that stand by the national parks and advocate for them on the Hill. So you wont be able to hand the NPS a check directly, like Trump did, but you can support its existence in roundabout ways.

The reason you can't donate directly to the NPS is because it is a government entity, funded by the federal government, and not a charity, though Trump doesn't seem to know the difference. On Monday, Press Secretary Sean Spicer handed the Secretary of the Interior Ryan Zinke the check. Zinke's a Cabinet member, so the move was akin to Trump handing Rex Tillerson, secretary of State, a few thousand dollars to renovate some embassies.

Nice gesture, right? Well, that's sort of all the check is. In addition to slashing the Interior Department's budget, placing a gag order on federal employees and scientists (including those at the NPS), and rolling back Obama-era climate regulations, $78,333 doesn't seem like all that much. If the president wants to protect the nation's parks, he could also do so through policy.

Critics of Trump's passing on the first quarter of his salary have also pointed out that the Trump family has cost American taxpayers millions already for travel and protection services. First lady Melania Trump and son Barron have remained in New York City, much to the chagrin of Big Apple taxpayers balking at the estimated half a million dollars extra (as opposed to security costs if she were living in the White House) per day to protect the family in the city. In addition to added security in New York, Trump has also taken 12 golf trips to his Mar-a-Lago resort in Florida during his short time in office so far, costing taxpayers around $3 million each, according to ThinkProgress. It looks like critics on Twitter, at least, would prefer Trump fund the National Parks Service and use his own money — the salary — to pay for his wife to live on 5th Avenue in New York City and their weekend getaways.

But, it's the president's salary, so he can do what he wants with it. Although if his administration keeps on the way its been going and continues to slash budgets for parks, it might be smart to add the NPS to your list of places to support anyway.