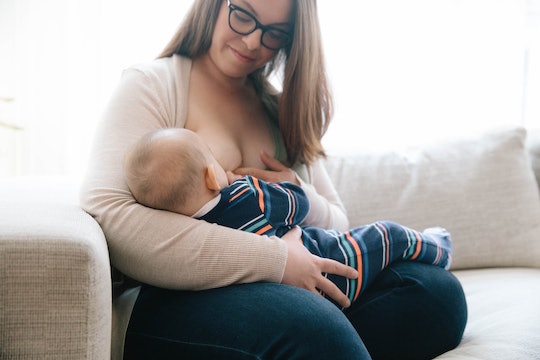 Here's The Deal With Drinking Activated Charcoal While Breastfeeding

If you've been on any form of social media lately, you may have noticed that taking activated charcoal is quite the trend, boasting many health benefits, including, but not limited to, detoxing your body. I've even seen claims it can help with low milk supply in nursing mamas. But can you drink activated charcoal while breastfeeding safely with no harm or side effects to your baby?

“Charcoal is thought to be safe to use during breastfeeding since it’s not excreted in human milk, nor is it absorbed from the gastrointestinal tract,” Dr. Sherry Ross, OB-GYN and Women's Health Expert at Providence Saint John’s Health Center in Santa Monica, California, tells Romper. The Mayo Clinic agreed, and noted it has not been reported to cause any problems in babies who are nursing. However, Ross warns, as a general rule, you would only want to use activated charcoal for a limited period of time for constipation.

“Activated charcoal is traditionally used for detoxifying the body of toxins, drugs, and poisonous substances. Not every claim needs scientific evidence to prove it is effective because we know medical studies are not an exact science. In the case of activated charcoal, there is no scientific evidence that it gets rid of toxins and helps with the digestive system,” Ross says.

As far as helping with milk supply, there is no scientific evidence to support that activated charcoal improves lactation there either.

So how does activated charcoal work exactly? “When taking activated charcoal, it combines with a gas or activating agent to expand the surface area, flushing out toxins quickly and helping treat constipation,” Ross explains. As far as proper usage, The Mayo Clinic noted you should have the poison control center’s phone number ready – just in case. And you should also not take it with ice cream or chocolate syrup apparently, as “they may prevent the medicine from working properly.”

Since activated charcoal doesn’t seem to actually work in improving lactation, what are some other ways to help in that area? Ross says, “The healthiest ways to improve lactation include frequent feedings, pumping often, hydrating all day long, minimizing stress, optimizing your diet, and getting adequate rest.”

Still feel like you’re having a low milk supply? It could be a hormonal issue, according to Baby Center. For other moms, it could be the baby just isn’t latching correctly. (Which happens — you’re not a failure of a mom)

While it’s perfectly safe to take activated charcoal while breastfeeding — since it stays in your gut and isn’t absorbed by anything else in your body — don’t feel like you have to do it to help with nursing. Activated charcoal doesn’t really do much for low milk supply, it just supposedly helps get rid of toxins in your system — though that also hasn’t been scientifically proven. If you do choose to use this method of detoxification, be careful, and make sure you follow the directions to a T. You don’t want to end up on the toilet all day, or unable to keep anything down, especially since that’s dehydrating. And isn’t hydration one of the things you need for a good milk supply anyway? So chug as much water as you can, get as much rest as you can, and maybe stick to drinking that lactation tea or eating some lactation cookies, which definitely taste better than charcoal.