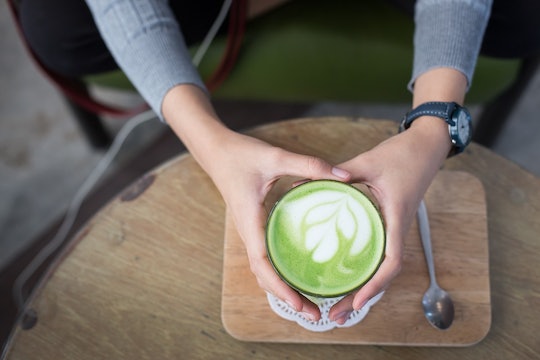 Can You Enjoy Matcha While Pregnant?

When it comes to trends, food trends are especially overwhelming. For a while there, you couldn't turn a corner without seeing some kind of recipe that used bacon and now it seems like everything is named after a mythological creature, rainbow colored, or includes matcha. The green tea has literally taken over entire bakeries (and mugs), but what about if you're expecting? Can you drink matcha green tea while pregnant, or is this one trend you'll have to avoid, like the sushi burrito?

The truth is, it really depends on how much tea you're going to drink. In an interview with Romper, Dr. Neha Singh Rathod says that you should limit your consumption to one to two cups per day because of the caffeine. "Anything overdosed during pregnancy is not recommended," Rathod adds. "It's always better to avoid too much of such beverages because of the direct effects on the baby."

But as far as matcha green tea or powder being dangerous in pregnancy? You're probably safe. It's the caffeine content experts are wary about, and as long as you practice moderation, you should be able to enjoy matcha. Breakaway Matcha noted that the caffeine in matcha also isn't like the caffeine in coffee or espresso — it won't give you a jolt of energy or make you feel "wired." Instead, there's a "timed-release mechanism" that can inhibit sudden insulin increases so you don't feel that energy crash afterwards like you might with other caffeinated beverages.

So don't skip out on your favorites just because you're pregnant. As long as you aren't consuming matcha green tea or powder 24/7, you and your baby should be just fine. Be sure to talk to your healthcare provider if you're concerned about the effects of matcha on your pregnancy.