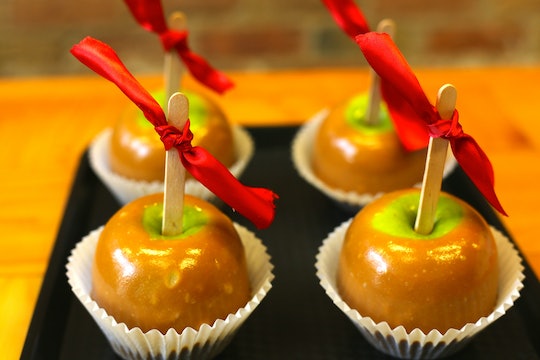 If You're Craving Caramel Apples During Pregnancy, Here's How To Chow Safely

As the unofficial fourth Sanderson sister, I am enamored by all things fall. I love the trees, the cool weather, the ability to swath myself in layer upon layer of knit material and leather boots. I love hot apple cider, pumpkin pie, and most especially caramel apples. Can you imagine a more delightful food? It's a perfectly tart-sweet treat that hits all the right fall notes. But in 2014, stories started popping up about the potential for danger lurking around the confection. If it's so dangerous, can you eat caramel apples while pregnant? Was the danger an isolated incident?

The possible dangers of caramel apples lie in the handling of the apples itself during the production of the sweet treat. In 2014, there was a deadly listeria outbreak that originated with packaged caramel apples, according to the Los Angeles Times. It wasn't the fault of the apple or the caramel, per se, but rather the relative cleanliness of the apple itself. The listeriosis bacteria lives in the soil, and when the apples weren't properly washed, the listeria remained on the apple, and spread into the community. While there's no current outbreak, the worry is still there. The listeriosis monocytes grow rapidly at room temperature — which is how most caramel apples are stored. If you make your own caramel apples and store them in the fridge, the likelihood of any listeria monocytes living and multiplying is vastly reduced.

Listeria is usually not a big deal, and most people don't even become symptomatic, according to the Centers for Disease Control and Prevention (CDC). It's contracted by eating food contaminated with the specific germ listeriosis monocytogenes. However, there is a vulnerable population which is more likely to become ill with the disease, and that's older people, younger children, people with disease that suppress their immune systems, and of course, pregnant women. According to the CDC, most pregnant women will experience a mild sickness from listeria, but there can be severe damage done to the growing fetus.

According to the American College of Obstetricians and Gynecologists (ACOG), listeria is rare, but can be fatal to some pregnant women, and is a life-threatening condition for her developing baby. It's understandable and right to worry about contracting it while pregnant, especially if you've read that it can live in something as seemingly innocuous as dessert on a stick. But are caramel apples safe during pregnancy if given the proper washing and storage procedure?

According to nutritionist Lisa Ree of Utica, New York, yes. She tells Romper, "While it's not the most nutritious choice you can make, it's by no means a boogie man. If you make it yourself at home, you're using well-washed fruit and high-quality cream, butter, and sugar to make the caramel." She notes that you should make sure that you are washing the fruit really well and then storing it in the refrigerator after you've made them, especially if you're not eating them immediately.

Caramel apples are delicious calorie bombs that are best served fresh and covered in chocolate candy and graham cracker dust. Let's just admit that whatever wonderful concoction you come up with in your own kitchen will far surpass the quality of a blister packaged mealy caramel apple from your local grocery store. To me, those often taste more of plastic than caramel apple goodness anyways. Also, if you've never made them with your children before, it's actually really fun. Yes, you have to do the hard stuff, but until you've seen a kid cover what is already an object of temptation in marshmallows and Reese pieces, you're missing out. Plus, you know it's safe because you're in charge, and that's really reassuring in the midst of all of the confusion pregnancy inspires.