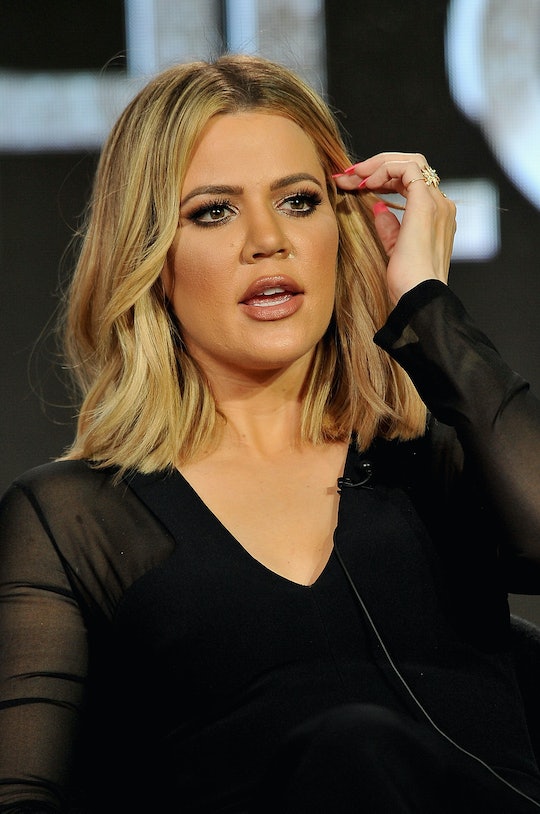 Can You Fly While 8 Months Pregnant? Khloé's Recent Trip Has Fans * Concerned *

When Khloé Kardashian took to the skies to fly to Japan this week, while 8 months pregnant, she received a lot of criticism online. Many fans were wondering why she'd risk being that far from her doctor so close to her due date. Granted, Khloe has way more resources at her disposal than the average pregnant mama, but still, can you fly when you're 8 months pregnant?

The fact of the matter is, when you reach the third trimester, you might be physically slowing down, but your life tends to keep going at it's usual hectic pace. There are still work trips and social commitments (you want me to go where for your wedding?) that sometimes require you to get on a plane. So, what's the verdict on flying 8 months along, as in the case of Khloé? The answer is nuanced — no two pregnancies are the same, and, alas, no two airlines are the same when it comes to their rules and regulations. American Airlines says no to traveling domestically if you are within seven days of your due date (unless you have a medical note), while Southwest Airlines has no restrictions, according to USA Today.

In terms of the medical safety of flying, the American College of Obstetricians and Gynecologist ruled, "In the absence of obstetric or medical complications, pregnant women can observe the same precautions for air travel as the general population and can fly safely."

Yet, many obstetricians will advise their patients not to fly after 36 weeks, and some OB's even make the cut-off at 32 weeks. That's because while the act of air travel itself is deemed safe for pregnancy, it's important to consider the full picture — would you be comfortable giving birth in a different city, especially if you go into pre-term labor and your baby would need to be in the neonatal intensive care unit (NICU) for an extended period of time? Would you be ok if a different doctor, one less familiar with your medical history, had to deliver your baby? And, if you are going to a really rural area, will there be obstetric care available there?

"These are things that I don't think people always take into account. But one of our jobs as healthcare providers is to think of all the bad things that could go wrong and to help mitigate that, so hopefully you don't have to," says Dr. Erin Duncan, MD, MPH of Atlanta Gynecology and Obstetrics.

There are other important factors to consider when contemplating a flight while pregnant. When sitting for long periods of time — which you tend to do on long flights — you are at increased risk for developing deep vein thrombosis.

"Especially on longer flights, women who are pregnant, just by nature of being pregnant, are at an increased risk of getting clots in their legs which can travel to their lungs, which can be life-threatening. If you are sitting for long amounts of time, you're increasing that chance. So when on flights, or even in a car for long amounts of time, we ask our patients to stop every hour, or every hour and a half, to get out and stretch their legs," explains Dr. Duncan.

Additionally, if you were planning on traveling soon, don't forget that we're still in the heart of cold and flu season. You're more likely to be exposed to viruses and infection when sitting in the close quarters of an air cabin.

"I would stress that anyone traveling get their flu vaccine if they haven't already gotten it, and to have their T-Dap vaccine if you are over 28 weeks," advises Dr. Duncan. "Plus, pregnant women with influenza are at increased risk of pneumonia, which is not something you want to be dealing with anywhere, let alone far from home."

It's also important to consider what the conditions are like where you'd be headed. While it's not making as much news these days, Zika is still a very real concern for pregnant women. It's always a good idea to consult the travel map put out by the Centers for Disease Control and Prevention (CDC) before making travel plans.

And lastly, many women may wonder if they're at increased risk of pre-term labor by being in the air. While the air cabin pressurization isn't an issue, not staying well-hydrated can contribute to early contractions, noted the American Pregnancy Association.

"You want to stay hydrated. Oftentimes when you're traveling and you're away from your home environment, your nutrition and your hydration slacks significantly. Those are the kind of things we really warn against, " says Rachel Hart, a certified professional midwife at BirthingWay Midwifery.

No matter when you choose to fly, whether at 8 weeks or 8 months, run it by your doctor for their medical advice. They are most familiar with you and your pregnancy, and their blessing with no doubt give you some peace of mind.

More Like This
From Sexy To Spooky, These Pregnant Halloween Costumes Will Make An Impression
The 16 Best Affordable Maternity PJs & Lingerie Sets On Amazon
20 Bridgerton-Inspired Baby Names
The Cutest Petite Maternity Clothes From Amazon Under $40