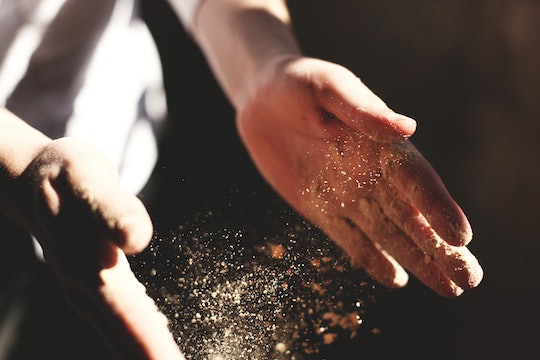 Food porn is nothing new and let's be honest — the sensuality inherent in cooking is what makes food taste that much better. Food can be sexy and life's too short, so why not embrace our passion for food and the deliciousness of life for what it is, am I right? If I sound suddenly inspired about the intersection of sexy food and the spice of life, blame it on the Salt Bae. Sweet sassy molassey... Salt Bae. Known IRL as Nusret Gökçe, Salt Bae is the hashtag pseudonym (hashonym?) of the ridiculously alluring Turkish chef that has taken Twitter by storm with his unbelievably sexy salting skills. Can you follow Salt Bae on Instagram?

Thank the stars in heaven above because yes oh yes, Nusret Gökçe is on Instagram — so now you can Salt Bae your day away watching his numerous videos showing his cooking and salting prowess that have me feeling funny things in my body that slabs of meat shouldn't inspire in me. Gökçe has actually been on Instagram since at least November of last year according to his first post — a short video of Salt Bae with Mesut Özil, a German soccer player. In the video, Özil introduces Salt Bae and thanks him for a delicious steak: "It was like a bomb (awesome)," Reddit user irlandayahudisi translated.

"Bomb" is a pretty accurate descriptor of Salt Bae in general, because his meme-tastic and salting skills have blown my freakin' mind.

Salt Bae just might be the best meme of the year so far — it's certainly the breakout meme of 2017, that's for sure. You can follow #saltbae on Twitter and Instagram for all of its wonderfully hilarious meme variations, but if you're looking to just sit and savor some OG Salt Bae, head to his Instagram account. You won't regret it.

Now, if you'll excuse me, I need to go get myself a juicy steak.

More Like This
Britney Spears & Sam Ashgari Share They Lost Their "Miracle Baby" In Statement
What Is Monkeypox & Should You Be Worried? Here’s What You Need To Know
Operation Fly Formula Begins With 78,000 Pounds Of Baby Formula
Chris Pratt & Katherine Schwarzenegger Welcomed A Baby Girl With The Prettiest Name