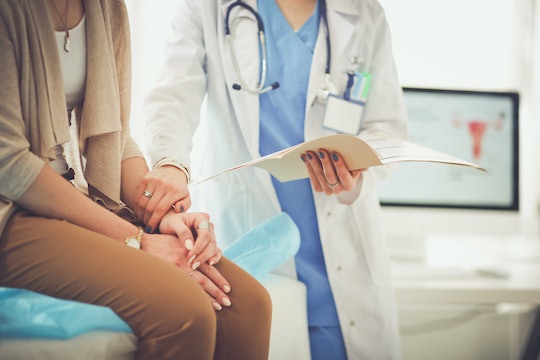 Here's What You Need To Know About Blood Tests For Miscarriages, According To Experts

Experiencing a miscarriage comes with a myriad of emotions. Alongside the devastation and heartbreak, uncertainty can also weigh heavily on a woman. Questions about why or how a miscarriage occurred are common, and knowing whether or not you can get a blood test for a miscarriage can help alleviate some level of concern and clear up any doubts about what is happening to your body.

"Miscarriage is usually diagnosed through a combination of tests that include blood tests, ultrasound, and physical exam," Gil Weiss M.D., Assistant Professor of Clinical Medicine at Northwestern Memorial Hospital and Partner at the Association for Women’s Health Care tells Romper. "The most common blood test measured includes hCG (human chorionic gonadotropin) which is a hormone that the embryo's placenta makes," Weiss explains. "In more than 98% of healthy pregnancies, the hCG doubles roughly ever 48 hours."

When your doctor checks your blood due to a suspected miscarriage, they're looking to see what your hCG levels are and will likely ask you to have blood drawn over the course of several days to confirm whether or not the hCG levels are doubling. Additionally, the progesterone level in your blood can also provide clues for doctors to confirm a miscarriage.

When a miscarriage is suspected, it is vital to involve your practitioner who will be able to determine exactly what the status of your pregnancy is. A blood test will likely be a part of the process, but it probably won't be the only test your doctor will need to use.

"A miscarriage cannot definitely be ruled out by blood tests only," David Weinstein, M.D., Chief of Obstetrics and Gynecology at Missouri Baptist Medical Center tells Romper. "Usually, an ultrasound is needed to make the diagnosis."

A minimally invasive ultrasound can help doctors determine the viability of a pregnancy when paired with a blood test. "Not seeing a fetal heartbeat when appropriate or visualizing a large blood clot can all contribute to a diagnosis of miscarriage," Weiss says.

Although doctors can use blood test results in conjunction with an ultrasound to make a miscarriage diagnosis, it truly depends on how far along the pregnancy had progressed before the suspected miscarriage on whether or not a blood test alone can confirm the diagnosis.

"Depending on how high the hCG level is, an ultrasound may be necessary to confirm a pregnancy gone array — either a miscarriage that hasn’t happened or an ectopic pregnancy," Weinstein tells Romper. "Often with very early pregnancy losses, the pregnancy is not developed enough to see anything on ultrasound and hCG blood levels alone can be followed to make sure the levels are dropping towards zero, thereby confirming a complete miscarriage."

Additionally, Weiss notes that practitioners can sometimes tell that a woman may be experiencing a miscarriage upon physical examination. "Sometimes a simple physical exam can also reveal a dilated cervix which can contribute to an inevitable miscarriage," he says.

With a miscarriage diagnosis comes a nearly unimaginable emotional toll, so it is imperative that doctors exercise an abundance of caution when doling out such a prognosis. So, while a blood test is necessary, relying solely on blood work to make a diagnosis should be done with the utmost discretion.

"Serial quantitative hCG blood levels can be used to predict if a pregnancy is probably going to be non-viable. But how early the pregnancy is is critical in interpreting the validity of this test in helping to predict a miscarriage," Weinstein tells Romper. "Early hCG levels that are not increasing appropriately are often suggestive of a poor pregnancy outcome. This is not always the case, however, and one should use great caution when relying on only blood levels to diagnose a miscarriage"