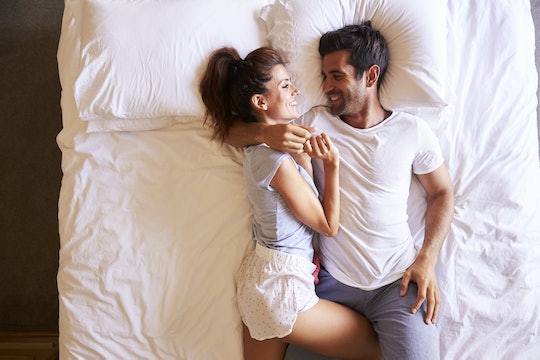 The Natural Family Planning Method May Be Perfect For TTC

You may be using apps to track your cycle and your fertility — either to prevent pregnancy or to get pregnant — but did you know that doing this is actually part of the Natural Family Planning Method (NFPM), a method that’s been around for ages? The NFPM was originally used by the Catholic Church to help avoid pregnancy without using birth control, though many women are now using the method to actually get pregnant on purpose. Can you get pregnant using the natural family planning method?

What exactly is NFPM? Basically, all it means is that you don’t use prescription medication or medical devices to control your fertility — whether you use it to prevent pregnancy or to get pregnant — you track your own cycles using a three-part tracking method.

This method requires you to measure your cervical fluid, your basal body temperature, and your cervical position, according to the American Pregnancy Association. And, when done correctly, the chances of you conceiving are pretty high. According to women’s health acupuncturist Kristen Burris, L.Ac, who spoke to Romper in an email interview, "When used appropriately ... those couples actually trying to get pregnant, and don't have any known infertility issues, have a 99 percent success rate of getting pregnant in the first year."

The first step to check your own fertility involves dealing with body fluid, which for some women, may be a deal breaker. But checking your cervical fluid is an important step when trying to conceive (TTC) using the NFPM. You can either check the fluid in your underwear —either by sight or touching it — or you can feel in your vagina and check the consistency on your fingers. "Through a woman's cycle, her cervical fluid will change from creamy or thick to a thinner, slicker, and stringy consistency," Burris says. "It's quite like an uncooked egg white that can actually be strung an inch or more between fingers. This is one indication of a woman's fertile window and optimal time to have intercourse if trying to get pregnant."

For part two, plan to get up close and personal with yourself again to check your cervix by "feeling your way toward [your] fertility," Burris says. "During ovulation, [your] cervix will go from feeling low and hard (a lot like your thumb or tip of your nose) to rising higher and becoming softer and more moist," she says. "Often women can't find their cervix during their most fertile days — as it has become so soft, it feels just like the sides of her vaginal wall … this is the time when a woman's body is most receptive to receiving her partner or husband's sperm to fertilize her egg."

Fun side note: And if your temperature stays the same higher temperature for 16 days, it could be an indication that you’re pregnant, according to Burris.

Does the NFPM sound like something you’d like to try? Of course there’s an app to help. Burris suggests using myNFP.net, LilyPro, Sympto.org, and Ovulation Mentor to help you track your most fertile days. If you want to go the more traditional route, Burris suggests reading the book Taking Charge of Your Fertility. She also recommends the website Couple to Couple League, which is a website with a “trained staff to help you through this process.”

If you’re in tune with your body, can stick to a schedule, and be diligent in collecting all the information, the NFPM is a great way to TTC. If you don’t want to get up close and personal with yourself that often or feel uncomfortable, there’s always the Ava bracelet to track your temperature, and ovulation predictor kits (OPKs) that show you when you’re most fertile. With these methods, you can start having sex a few days before your ovulation occurs, or every day leading up to it — remember, sperm can last up to five days in there. And when that OPK says you’re ovulating, it’s time to call your partner and plan for an evening — or afternoon (ooh la la) — in the sack. Have fun, and good luck.