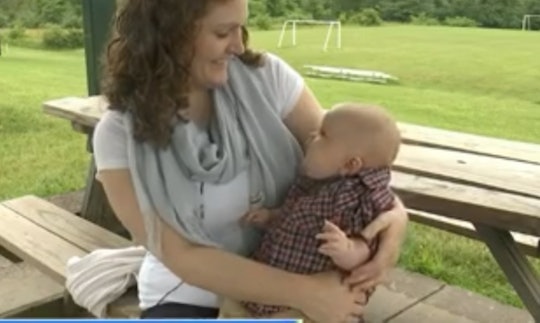 This Mom Had Her Fallopian Tubes Removed, But Still Got Pregnant

Imagine you decide you are done having kids. Whatever that number might look like for you — one, two, three, 20 kids, whatever. You know you're satisfied with where you landed and so you take measures to end that time of your life. Decision made, all is well. You have your fallopian tubes removed and rest easy because what could happen? According to one mom's story, she still got pregnant without her fallopian tubes and welcomed a baby years after she had the procedure done.

About a year ago, Elizabeth Kough was a mother of three living in Missouri. As she explained in an interview with ABC News 7, she was in a relationship at the time and realized that something felt a bit off with her — as in she thought she might be experiencing pregnancy symptoms.

That seemed highly unlikely as Kough told ABC News 7 she had gone through a procedure called a bilateral salpingectomy, where both of the fallopian tubes are removed, three years earlier. She did this not simply to avoid further pregnancies but because removing the fallopian tubes can reduce the chances of ovarian cancer, according to the American Cancer Society, something that runs in her family, according to People.

According to the American College of Obstetricians and Gynecologists, this procedure is considered highly effective at preventing pregnancies since the removal of the fallopian tubes means the eggs have lost their passage to the uterus.

Basing her decision on several contributing factors, Kough decided to remove her tubes. As she told Good Morning America, "I also hit age 35 and they medically say at that age pregnancy becomes more high-risk. I was also divorced and single and had three children, which is quite a blessing for a family, but I thought that was probably enough."

Cut to Kough experiencing pregnancy symptoms a few years after the procedure and starting to get a little nervous. "I had read that if I did become pregnant after this procedure there's a higher risk of an ectopic pregnancy, which can be dangerous. I thought it wouldn't hurt to just take the test and I really didn't think it would be positive," she told Good Morning America.

It was positive. According to the Kansas City Star, Kough immediately went to the Meritas Health in Kansas City, Missouri with her boyfriend where an ultrasound confirmed the seemingly impossible — she had gotten pregnant naturally without fallopian tubes.

Kough's case is incredibly rare. Dr. Dawn Heizman, an OB-GYN from Meritas Health, told ABC News 7 that, generally speaking, the only way for a woman to get pregnant without fallopian tubes is through in-vitro fertilization. "We know that eggs can travel in the abdominal cavity and get into the uterus. In Elizabeth's case, it's so rare because she has no tube to pick the egg up," Dr. Heizman told the news outlet.

The shocked mom told People that there was an assumption that the tube removal had not gone as planned but that turned out to be incorrect. "The thought process was it was probably a botched surgery. But it turned out — the doctors pulled my surgical records, they did ultrasounds, and then when I had a caesarian, they were able to look inside my abdominal cavity and the surgery was done entirely properly. There were no tubes," she told the magazine.

Despite the fact that there were no tubes, Kough welcomed her healthy baby boy Benjamin in March, according to the Kansas City Star. And while he was clearly a pretty major surprise, Kough told People she feels incredibly blessed. "He is a beautiful baby. I am exceptionally lucky to have him in my life," she said. "I have one child leaving the house and one child coming in. It’s hard to explain. I just feel very full of joy. Very, very full. I’m very blessed to have him around. I’m shocked in a great way. I’m shocked and awed."

The story of Elizabeth Kough might be a bit of an anomaly, but it can also be considered something of a cautionary tale. Because sometimes you just don't know what can happen... even if you do all the research in the world.