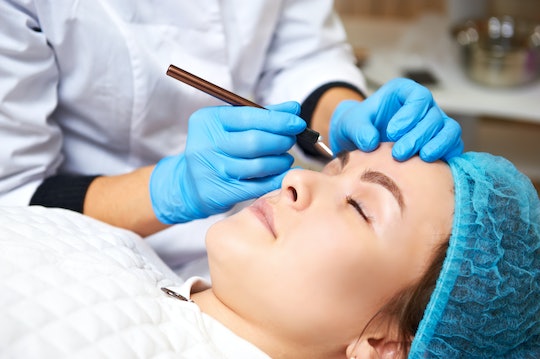 I am a huge tattoo fan. In addition to the ones I already have, I have several planned out for whenever I have funds to pay for them. However, I’m also trying to conceive (TTC), so I’m wary about getting more ink because I’m not sure how safe it would be to get tattooed while pregnant, even if it’s early. For some women, this concern includes microblading, which is similar to getting tattooed as it involves little needles inserting pigment under the skin. But can you get your eyebrows microbladed while pregnant? Every pregnant lady deserves to "treat yo self" to some killer brows, but at what cost?

Dr. Sherry Ross, an OB-GYN and women’s health expert at Providence Saint John’s Health Center in Santa Monica, California, says in general, microblading is a safer alternative than tattooing. “It’s not permanent, but still involves using a handheld tool that applies a non-permanent ink to the skin of the eyebrow,” she tells Romper in an email interview. However, depending on where you get it done, you’ll be at risk for an infection. “It may be a safer alternative to use a brow pencil to achieve the same effect,” she adds.

As far as traditional tattoos, Ross says it’s not recommended during pregnancy. “You potentially have the risk of infection, which could be dangerous to the growing baby …. there is also a risk of HIV or Hepatitis B infections. It’s an unnecessary elective body art that can wait the 9 months,” she says.

It's worth noting that the Alliance of Professional Tattooists noted it can be safe, as long as you follow certain guidelines — guidelines that are the same even if you aren’t pregnant. Make sure your tattooist is a registered practitioner, they always wear gloves, they have a sterilizing unit for their instruments, all the needles are new, disposable and made for single-use, all the ink used for your tattoo is unopened and sterilized, and the shop and work stations are clean. The website also suggested that the artist is available for the first few days after you get tattooed in case you have any problems. To be honest, if I went to a shop that didn’t do these things, I’d walk right back out, pregnant or not.

According to the American Pregnancy Association (APA), the main concern with getting tattoos — whether it’s microblading or traditional body art — is the risk of getting an infection, like HIV or Hepatitis B. “And although the risk is small, it is recommended you wait to get a tattoo until your baby is born,” the APA suggested.

As with any tattoo or microblading procedure, there are always risks of infection, but with modern tattoo shops and microblading places, they’re all held to standards of impeccable hygiene, and if they’re a reputable place, they’ll never ever share needles. If you’re worried and don’t think even the slightest risk is worth it, maybe stick to eyebrow pencils and temporary tattoos until after you give birth.