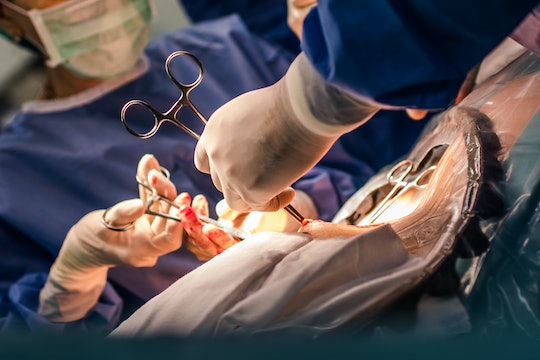 While you’re being wheeled back for your C-section, you begin to think back on your pregnancy, or multiple pregnancies, and might start thinking that this is your last kid. Many moms do and then wonder, hey, since the doctor will be in there anyway, can you get your tubes tied during a C-section? I mean, it seems like an obvious way to kill two birds with one stone, but how does it work? Can your child's birth really be a one-stop shop for birth control and a baby?

Now as far as if the surgeon actually “ties” your tubes, Bustillo says that historically, they were actually tied. “A small segment of each tube — about 2 centimeters in length — was removed and the stumps were ‘tied’ with a suture,” he says. “This resulted in an interruption and permanent blockage of each fallopian tube so that egg and sperm during future acts of intercourse are not able to meet, and thereby fertilization is blocked.” Now it’s more common to remove both fallopian tubes entirely, Bustillo says. And this change is for a very important, and possibly life-saving, reason. “The rationale for this change in technique is that in recent years, it has been discovered that a significant percentage of ovarian cancer actually originates in the distal end of the fallopian tube. By removing the entire tube on both sides, we are able to decrease the incidence of ovarian cancer, while not actually removing the ovaries,” he says.

And while physicians absolutely shouldn’t try to change your mind or make you feel guilty for your decision, they probably will make sure at the very least that you’re 100 percent positive you want it done. Because unfortunately these days, it’s not really reversible once the procedure is over. It used to be, according to Conner, but she says there are very few doctors who do “tubal reversals” anymore. Bustillo agrees and says while there may be a few gynecologic surgeons who have the “necessary expertise,” their attempts are often unsuccessful and the surgery is not usually covered by insurance. “When tubes are removed rather than blocked, reversing the surgery is impossible. Couples considering tubal ligation or tubal removal at the time of cesarean should consider this a permanent method of birth control. There are many reversible methods available, and the couple should explore all options with their healthcare provider,” he suggests.

As far as this being 100 percent effective birth control, believe it or not, even getting your “tubes tied” isn’t fail-safe. Conner says while there are very few cases that happen after tubal ligation, if you do become pregnant, it will be abnormal and typically ectopic. Another crazy thing that can happen is your “stumps” joining together and allowing fertilization, according to Bustillo. “Stumps” being leftover parts of your tubes. However, he says it’s “exceedingly unlikely if the entire tube is removed on both sides.”

If you’re 100 percent sure you’re done having babies, it’s good to know you can get your tubes tied while the doctor is in there performing your C-section. Give it some serious thought before you make the decision though and talk to your healthcare provider beforehand. It's not exactly a decision you should make on the way to the OR.