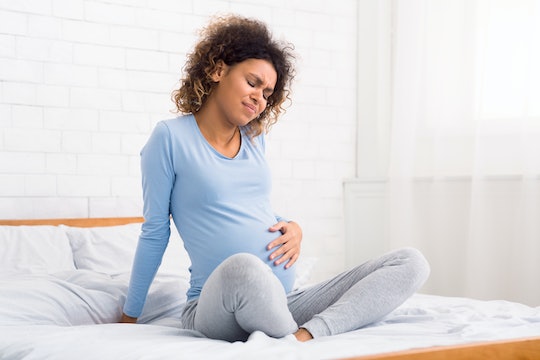 Your Labor Pain Depends On Which Phase Of Labor You're In, Experts Say

When thinking about childbirth, the pains of labor are generally thought to be a given. Of course every woman is writhing in agony like a feral animal, alternately shouting for the epidural and screaming profanity at her partner. That's just what labor is! But does every woman really experience contractions in this way? Is it possible to go into labor without experiencing any pain?

I spoke with Dr. Jennifer Butt, an obstetrician with Upper East Side Obstetrics and Gynecology. She says that when thinking of labor, it's first important to distinguish between "early labor" and what is considered "active labor."

"In early labor, a woman will typically have mild and irregular contractions that are often not painful," says Butt. "She may have slight pink or bloody discharge or pass her mucus plug. This is normal, and we typically want women in early labor to stay at home unless her water has broken."

Active labor, however, is a different story: "Active labor is when contractions become stronger, regular, and much closer together, causing cervical dilation to progress from 6 to 10 cm. These contractions are typically very painful."

So yeah, labor? It's generally going to hurt. A lot. Of course, the level of pain a woman experiences will depend on how she chooses to manage it. Obviously, if she goes the epidural route she can pretty much expect to have some relief. But is it possible to experience a pain-free labor without meds? Some doctors think so.

The French obstetrician Michael Odent, for example, believes women are naturally built to manage labor pains quite easily if they create the right circumstances for it. (Many midwives follow this same line of thinking.) As Odent told New Scientist, he thinks that if a woman removes distracting external stimuli from the delivery room (things like like hospital lighting and, er, your partner) she can simply "stop thinking," thus allowing a natural phenomenon known as the fetus ejection reflex to occur. When this happens, the baby basically slides out painlessly, with little effort from mom. (And yes, Fetus Ejection Reflex is the name of my synth pop band. Or it's going to be, as soon as I form one.)

Interestingly, Odent (and it should be noted, he's a bit of a controversial figure these days) also thinks women should have a midwife sitting in the corner knitting while they're in labor — an idea that many midwives support. Which might be totally soothing? Maybe? I mean when I think back on my own birthing experience, I think I might have been irritated that while I was struggling to push a human out of my vagina, my midwife was crafting a new infinity scarf. But maybe not?

When it comes to labor, one of the main things to remember is that it's unique for every woman. Ever see this Facebook post from 2016? When January Harshe (the author of Birth Without Fear) prompted women to fill in the blanks for "I went into labor at _____ weeks, was in labor for _____ hours and pushed for _____ minutes/hours" the answers were as varied as the spelling of the name Kayleigh. In other words — wildly different.