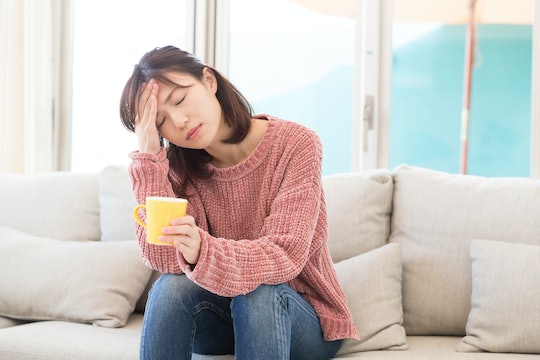 When you’re trying to conceive, that two week wait between the time you ovulated and when you should take a pregnancy test can drive you nuts. Are your boobs hurting because you’re pregnant, or is it PMS? What about those cramps — are they menstrual or from implantation? Can you have pregnancy symptoms before a positive pregnancy test? Some believe that you can’t have symptoms for something that isn’t there, but personally? I think it depends on what you consider a “pregnancy” symptom, because implantation is definitely a part of pregnancy (the most important part) and there are most definitely symptoms for that even before you have enough hCG in your body to turn a positive pregnancy test.

When implantation occurs, some women feel cramping, others bleed, and some women do both. After implantation, your uterus begins to grow and stretch, causing a pinching and tugging sensation as well. Implantation can occur six to 12 days post ovulation, and once the embryo is implanted, that's when the pregnancy hormone, hCG, shows up in your bloodstream.

According to Dr. Adrienne Zertuche, an OB-GYN at a Division of Atlanta Women’s Healthcare Specialists, “The cardinal sign of early pregnancy is missing an expected menstrual cycle by more than a few days. Many women may also experience nausea and vomiting, breast enlargement and tenderness, increased urinary frequency, and fatigue.”

"The symptoms of early pregnancy are vague, and most of them can have other causes. In fact, up to 10 percent of women experience these symptoms when they are not pregnant. For that reason, if you have symptoms in the setting of a negative pregnancy test, they are probably related to something else. But if the symptoms persist or worsen, you should consider repeating your pregnancy test in one week or being evaluated by a physician," she tells Romper in an email interview.

Zertuche also says that 60 percent of women begin to experience at least one pregnancy symptom five to six weeks after their last menstrual period, and by eight weeks, that percentage jumps to 90 percent.

Most women don't even know they are pregnant until that missed period, because that's when the hCG hormone is high enough to really start to make you feel crummy. Listen to your body, and if you're really in tune, you may notice some things feeling a bit off, especially if implantation is occurring. Unfortunately, implantation cramps and bleeding can just be a sign of PMS, so until you miss your period, try to relax before taking that pregnancy test. (Easier said than done, right?)

So yes — technically you can feel pregnancy symptoms before you turn a pregnancy test positive. But if your test is negative, you can probably chalk those symptoms up to something else. (Like your period on its way.)