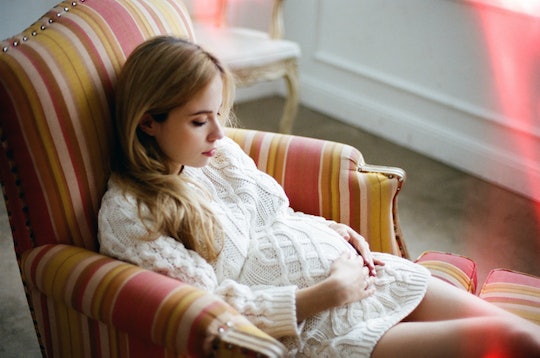 Can You Have Sex In The Third Trimester Of Pregnancy?

I had a lot of questions during my pregnancy, but the majority of them were asked during those final months. The third trimester is no joke, and despite loving every moment of my pregnancy, I was done. I asked questions like, "Why do my hands go numb? Am I going to be swollen forever? Will my shoes ever fit again?" But some women have entirely different questions, like wondering if you can have sex in the third trimester of pregnancy.

According to Parents, yes, you absolutely can have sex during the third trimester, as long as your pregnancy is considered healthy by your doctor.

Many moms-to-be worry that as your pregnancy progresses and your baby grows, you're putting your unborn child in harm's way by having sex. But the Mayo Clinic notes that your baby is protected by the amniotic fluid in your uterus, as well as the actual muscles of your uterus. Also, your cervix is sealed off by a mucous plug according to What to Expect, which means no matter how deep the penetration is during sex, your baby is fine, even if they're head down for delivery.

If you're worried about sex in the third trimester leading to pre-term delivery, you can relax. According to Parents, there's no real scientific evidence that sex induces labor. In fact, a 2006 study published in the American Journal of Obstetrics and Gynecology actually found that women who did participate in sex actually delivered later than those who abstained from intercourse. Doctors may suggest you get it on as you near your due date, but having sex throughout your third trimester doesn't suggest that you'll go into pre-term labor or ripen your cervix. If you have a history of pre-term labor or are at risk for a miscarriage or early delivery, however, your doctor may advise you against sex.

The third trimester may be full of restrictions, like not being able to tie your shoes or enjoy a day out at Disney World, but you can still enjoy sex in the last months of pregnancy. So go for it, you goddess.