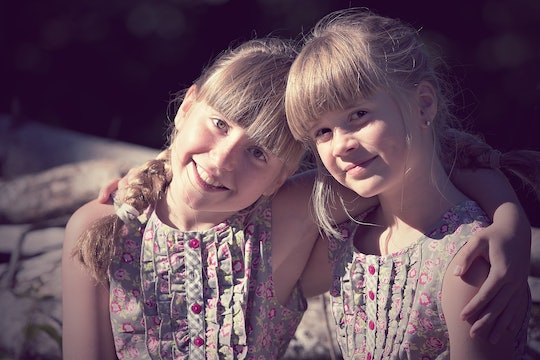 Can You Improve Your Chances Of Conceiving Twins?

Before my sister had her son, she would say that she kind of hoped to get pregnant with twins. She knew she wanted two kids and figured she would just have them both at once — why not, right? But in the throes of new motherhood, she looked at me with big eyes and wild hair, saying, "Can you imagine doing this with two? Two?" I nodded in agreement and promptly ushered her to the shower. But many people do hope for multiples and even try different methods to increase chances of conception. But can you improve your chances of conceiving twins?

"The answer is, yes, you can increase your chances of having twins, but this is a matter of statistics and not by any means a guarantee," says Dr. Steven Hausman, president of Hausman Technology Presentations and a former research scientist at the National Institutes of Health, in an email interview with Romper. "The likelihood of conceiving twins is not determined by any single trait. Rather, it is a complex process that probably involves multiple genetic and environmental factors, depending on the type of twins."

Those two types of twins, Hausman says, are classified as monozygotic (MZ) and dizygotic (DZ). In short, MZ twins — or identical twins — occur when a single egg cell is fertilized by a single sperm cell. The resulting zygote splits in two and voilà — identical twins make their home in the womb. Hausman says identical twins are most often not caused by genetic factors, except for in the rare case where a family is bursting at the seams with multiple sets of identical twins.

On the other hand, DZ twins — also known as fraternal twins — occur when two egg cells are each fertilized by a different sperm cell in the same menstrual cycle, says Hausman. Fraternal twins are about twice as common as identical twins, and they are much more likely to run in families.

Hausman says factors that can influence the likelihood of fraternal twins include maternal age, race, and even being a twin yourself. A woman who is 37 or older is four times more likely to have fraternal twins than at age 18, according to Scientific American. There are, however, some risk factors involved with getting pregnant at an advanced maternal age. As for race, Hausman says black women are statistically more likely to have DZ twins than white women. On the other hand, fraternal twins are less likely in Asian and Hispanic populations.

More controllable factors include nutritional tips, like eating wild yams (cassava root) and dairy products — although Hausman points out this could be the result of cows being treated with growth hormones. Folic acid for women and zinc for men has also been shown to boost chances of a multiples pregnancy, and breastfeeding while trying to become pregnant can also help.

According to WebMD, fertility drugs and in vitro fertilization will improve the odds, too.

As for the actual raising of the twins, I know it's double the belly load when pregnant and definitely twice the work, but the love? Oh, that's multiplied too.