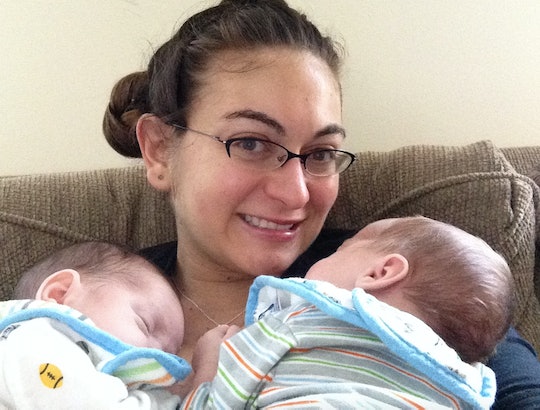 The One Thing No One Tells You About Having Twin Newborns

When I was pregnant with my twins I got a lot of advice, both solicited and unsolicited. Some of it was great ("sit between their Bobby pillows on the floor so you can feed a bottle to both at once"), and some of it was stupid ("if you have an epidural, the babies will be dumb"). On top of all the two cents I collected from friends, family, and strangers, I also did a lot of my own research to prepare for the challenges of taking care of newborn twins. Between people chiming in and all my baby book studies I thought I was totally prepared for parenthood, but it turns out there's one thing about having newborn twins that no one warns you about: the fact that even though they're twins, they're still two totally different people.

More Like This
The Best Baby Cribs
The 21 Most Popular Baby Names In 2021 (So Far)
Can You Sunbathe During Pregnancy?
The Best Breastfeeding Positions For Newborns

I know it seems obvious, but when you're so full of baby that you look like a non-blue version of Violet Beauregarde from Charlie and the Chocolate Factory, your thinking isn't 100 percent clear. I knew that even though they'd be the same age I wanted to treat my sons as distinct individuals. I had grand plans of honoring my twins' unique personalities once they were old enough to have preferences for things like favorite colors and hobbies, but it didn't even occur to me how their individual personalities would impact their wants and needs even as newborns.

When I was pregnant, I was blinded by double vision and the need to buy twice the typical baby necessities: two cribs, two car seats, two high chairs, two sets of bottles and binkies, and enough boxes of diapers to build the world's largest box fort. Combine that with baby books that only talk about how a newborn's routine is pretty much eat, sleep, burp, poop, and repeat, and it was easy to think that my days caring for newborn twins would be entirely predictable. Use these products, do these things in this order, and voilà! mission Raise The Twins will be complete. I was so worried about how I'd accomplish all that and manage to find time to squeeze in a shower for myself that it never occurred to me the paths my kids might take me might look completely different than everything I'd read and prepared for.

I remember the exact moment I realized just how screwed I was. The boys had only been home for a couple days and our fridge was beyond empty. I really needed to go grocery shopping, but the boys usually started off their days with poop explosions, so I thought it'd be best to wait until they got that out of the way before we left the house. When that now familiar smell hit my nose I was relieved, because I knew once the boys were changed we could get on with our errands. So I changed one baby, and after I stopped gagging, I turned to his brother. But when I opened the second diaper, there was no poop to be found.

I'm sure sleep deprivation played a large part as to why I was so dumbfounded, but it took me a few minutes to understand that this baby hadn't pooped just because his brother did.

I even lifted the diaper up off the floor and looked underneath, as if the poop had tried to trick me. I was feeding them the same thing at the same time, and I'd just assumed they would have the same bowel schedule too. It marked the first of many times when I'd realize that even as newborns, twins are still their own people.

Take, for instance, the infant swing. My cousin swore it was a "magical baby soothing invention" when we first borrowed it from her, and indeed, Lolo passed out within seconds the first time I strapped his fussy self into the seat. The next day Remy started crying while we were trying to eat dinner, so I thought the swing would be the perfect solution to give us 10 minutes to finish up. But when I put him in the swing, he screamed as though the gentle swaying was a 60 MPH inverted roller coaster, and not in the, "this is so much fun!" way. (Sidenote: Launching yourself clear across the room to hit the swing's off button is an excellent way to pop a c-section stitch, in case you were curious.)

One morning at 3 a.m., while looking for nursery rhymes on YouTube in a desperate attempt to get Lolo to fall back to sleep, I accidentally hit a video of John Mayer performing a cover of "Free Fallin'" instead of "Twinkle, Twinkle," and for a good two months singing or playing that song was the only way to get him to sleep. His brother, on the other hand, obviously had superior musical taste because hearing it made him wail. What made one of my sons happy absolutely aggravated the other, and there was no telling what would trigger each reaction. It was like groping in the dark for a light — there was no telling what I'd make go crash and boom by accident. People who say you should cherish every moment of your twins' infancy don't know what it's like to try and whisper a song in a baby's ear while making sure the baby laying in your other arm doesn't hear you.

But that wasn't the end of my sons' differences. They both ended up with different bottles because Remy had reflux and Lolo didn't. One of them became a hardcore binkie addict, and the other one was insulted by the very thought. They laughed at different things, cried at different things. Basically the only thing they had in common as newborns was their age and the fact that I was smitten with them. And that's the other thing I wasn't prepared for.

People try to tell you how much you'll love your kids, but there's really no way to brace yourself for the love you feel as a parent until you experience it. I wasn't prepared for how different my twin newborns would be, and I won't lie and say it was easy, but the joy I felt in being their mom overshadowed any of the frustrations. There's a learning curve for all parents with a newborn, both in finding your confidence in how to take care of your baby and figuring out what works to sooth your infant or make them happy. But with twins, you've got to do twice the work to get to that point. That was the part of having twin infants I wasn't at all prepared for. But once I did finally figure out how to take care of them, I felt like Supermom.