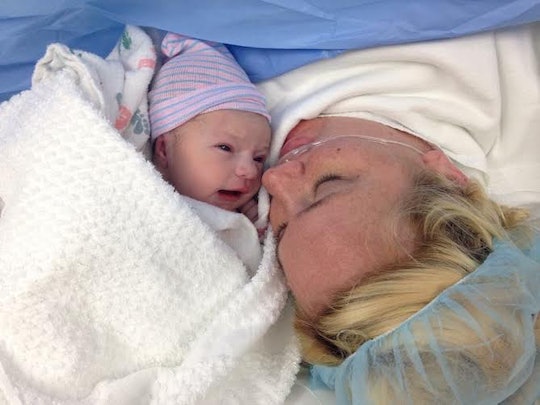 Before I gave birth, I didn't plan to have a c-section. I also never planned to be in labor for over 24 hours only to decide to have a c-section. In fact, I remember a couple weeks before my due date, I posted my thoughts on preparing for my birth onto my Facebook page. A couple of friends commented that I should prepare myself for the possibility of a c-section, since they had not anticipated it and ended up with one. One of those friends was still having a hard time coming to terms with it four months into motherhood.

I remember thinking that, no matter what, I didn't want that to be me. Even if my birth plans don't go the way I want them to, I thought, I want to be able to handle it well. My idea of the perfect birth did not go as planned, and though I thought I was doing well with it, I had no idea that I wouldn't just have the initial change of plans — the c-section — to deal with, I'd have another interruption in my birthing experience two months down the road. When my c-section incision burst nearly eight weeks after I delivered my daughter, it nearly ruined my whole view of my birth.

I was four days past my due date when my doctor noticed that there was a low amount of amniotic fluid in my womb, so we went to the hospital to be induced. Once there, my labor progressed slowly. After 30 hours in — I'd had an epidural around hour 24 — I was ready to start pushing. I pushed for about half an hour, and my doctor informed me that my daughter was "sunny side up," which meant that her head was down, but that she was facing up — a position harder for a baby to be pushed through than if she was facing down. He also told me my pelvic bone was shaped in a way that would make it harder and take longer for her to come through.

I didn't know until later, because my husband and the medical staff remained calm for my sake, but both of our heart rates were rising higher than normal, which can cause other complications. My doc explained that I could keep trying to push, but that I'd likely have a tear from my vagina to my anus and that he'd most probably have to use forceps to pull my daughter out. We didn't know how much longer I'd have to push, and my doctor advised that she needed to come out sooner rather than later. Even though I wanted a vaginal birth, at that point, I wanted my baby more.

My daughter, mom, and I barely got into the examination room at her pediatrician's office that morning when I looked down to the horror of blood and pus oozing from my incision all over my shirt and leggings.

In the days after my daughter's birth, we didn't get to go home immediately. Because of my c-section we stayed longer in the hospital, but on the eve before we would have gone home, my daughter was having some trouble breathing, and my town's hospital is small, so they sent us to a bigger hospital with more specialized doctors and a NICU. Everyone told me to take it easy, that I had just had major surgery. The wheelchair and the pain meds were my best friends, and my overwhelming love for my baby eclipsed the soreness and fatigue I felt.

Things after that progressed normally. I was too busy getting to know the tiny human my husband and I had made to worry too much about not having the birth I'd always imagined. Plus, I was healing well and overall, I felt pretty good. My six-week postpartum checkup went well. According to my doctor, my incision looked great, and he even said that the scar would disappear over time. He also cleared me for normal activity. So it came as a total shock to me when my incision area began to feel sore and was inflamed less than two weeks later. We had family coming to visit that weekend and had made plans to go to our town's Christmas parade, so I put the dull ache and the redness aside, hoping they'd go away on their own. But just days later the pain was worse and the incision was swollen.

My daughter's two-month checkup was the next morning, so I made an appointment with my doctor after that. I never made it to that appointment that afternoon. My daughter, mom, and I barely got into the examination room at her pediatrician's office that morning when I looked down to the horror of blood and pus oozing from my incision all over my shirt and leggings. Since her pediatrician's office was connected to the hospital, we went straight to the ER. They drained the abscess and wrote me a prescription. I thought we were done. Two days later though, I called my doctor so he could see it himself.

Calling my incision a "wound" only made matters worse. That wound was actually the place on my body where my daughter came into this world, and I'd never heard anyone ever call a sore vaginal canal a "wound." It made it sound like something terrible had happened to me.

This time around, my doctor needed to open up my incision even more. Not all of the infection had been drained, and he needed to ensure he got it all out this time. Once he was finished, he sent me home with directions on how to clean and pack my fresh wound. Because of everything, we missed Thanksgiving with our extended family and the chance to introduce our daughter to them. I was devastated.

My doctor had mentioned that usually, when an incision bursts, it's within the first week or two postpartum. That meant the infection within my incision must have laid dormant for nearly two months — undetected from me or my doctor — before erupting at the surface. He assured me there was nothing I could have done to stop this. But the two-month mark was right around the time that I was beginning to feel like myself again. The transition from pre-baby to full-on new mom shook up my world in wild and wonderful ways, and it was right when I almost felt like I was coming into my own in my new role that this crazy thing happened. I felt like a pawn in the game Sorry! being bumped back to start. I started hating the fact that I had to have a c-section, which then tainted my feelings on my daughter's birth — the very thing I had set out not to let happen.

The c-section was the surgery, the actual incision on my body. Her birth and delivery were her entrance into this world. The complication was not because my body was bad at bringing her into the world. The infection had nothing to do with me.

Like the infection that had been making its way to the surface in order to get out of my body, thoughts I didn't know were there emerged as well. I no longer knew if I could even say I delivered my daughter. Did I really even birth her since she'd actually been pulled from my womb by my doctor's hands? And calling my incision a "wound" only made matters worse. That "wound" was actually the place on my body where my daughter came into this world, and I'd never heard anyone ever call a sore vaginal canal a "wound." It made it sound like something terrible had happened to me. And I'd worked so hard not to believe that my daughter's birth was "terrible."

What's more, it wasn't until my incision burst that I began to have negative thoughts about my ability to birth children. In the aftermath of a complication that wasn't my fault, I was flooded with worries: Will I ever get pregnant again? Will I ever be able to give birth vaginally? Could this happen again? Can I handle it if it does?

It took hours of soul-searching, usually in the tender moments of breastfeeding, for me to discover the difference in my mind and heart between the c-section and her birth. The c-section was the surgery, the actual incision on my body. Her birth and delivery were her entrance into this world. The complication was not because my body was bad at bringing her into the world. The infection had nothing to do with me.

Once I let go of the fact that the incision bursting wasn't my fault and that it didn't somehow make my body bad at child-birthing, I was unapologetically grateful that my daughter came into this world the way she did. Though the idea of what it would've been like had I pushed for a vaginal birth has crossed my mind several times, the fact remains that my daughter is here and healthy largely because I had a c-section delivery. It's true that I now have a bigger abdominal mark to show for it, but my daughter's presence and vitality in my life overshadows any surgical scar.