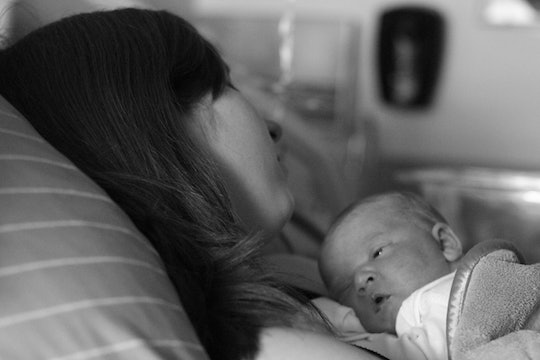 When I was pregnant with my first child, I knew what kind of birth I wanted. I wanted the chance to have a natural, unmedicated birth. I trusted my body. I wanted to see it at its most amazing, raw state. Yet at the same time, I knew that my pain tolerance may not be all I had cracked it up to be. I was open to the idea of an epidural. I was open to my plans changing. I knew that there were variables that I could not control when it came to the wild unknown that was birth. So, when I made my birth plan, I did so with a grain of salt. It was my best-case scenario plan.

Early on in my third trimester, I brought up my birth plan with my doctor. I told him I wanted to try for an unmedicated birth, specifically one without Pitocin or an epidural if we could avoid it. I asked if it would help him to see my birth plan in advance, if perhaps I should bring it to my next appointment so we could go over it. It was short, I told him, less than a page. He said it wasn’t necessary. He asked why I wanted to try a natural birth. He didn’t seem to absorb my answer and simply replied, “We’ll see what happens.”

I was crying and screaming and exhausted. I didn’t bear down when he told me to, and he decided to give me an episiotomy (a surgical cut) without asking my permission and then used vacuum suction to pry my half-baked son into the world.

I should have known then that my doctor would go on to ignore my birth plan. If I wasn’t so far along, I might have taken the time to find a new doctor, one whose eyes wouldn’t glaze over when I talked about what I envisioned for my birth. I was too timid to reiterate how important this was to me. I trusted that he had my best interests at heart, and figured that I'd have the final say in what happened in the delivery room when the time came.

As a first timer, I wasn’t sure what labor was going to feel like. I had Braxton Hicks contractions for weeks leading up to my due date. I went in a four weeks before my due date, alarmed by the intensity and frequency of these “warm-up” contractions. The nurses seemed surprised by the intensity when they hooked me up to a monitor, but since I was only dilated to 2 centimeters, they sent me home.

When I came back at 38 weeks gestation, I was still having Braxton Hicks contractions. I wasn’t in real labor. But someone decided to admit me anyway, because I was dilated to four centimeters. It was late and my doctor wasn’t there, so I was at the mercy of hospital staff until morning. They apparently didn’t care about my birth plan either, and decided to break my water. They gave me the option of now or later, and I chose later, but when it came right down to it, I had no choice at all.

I was shocked and unable to process what had happened, but I felt like something had been stolen from me.

I was tricked into taking Demerol, told it was no more than “Tylenol in my IV” and not a powerful opiate. My birth plan was already falling apart. I was relieved when I finally saw my doctor come to my room, nearly 15 hours after I was first admitted. Instead of putting me back on track, he ordered Pitocin to increase the intensity of my contractions. The unnatural pain was so intense that I needed an epidural, which made me vomit and pass out as my heart rate, and the baby's, plummeted. When I woke to my husband and mother crying and a room full of new doctors, no one bothered to tell me what had happened or what they were doing to me. They were talking about me, around me, but my voice wasn't a part of the conversation. I felt dehumanized and scared. I wanted it to be over.

Then I labored so long that the epidural wore off. I was crying and screaming and exhausted. I didn’t bear down when he told me to, and he decided to give me an episiotomy (a surgical cut) without asking my permission and then used vacuum suction to pry my half-baked son into the world.

My doctor was out of the room without so much as a “good job” after I had endured 23 horrific hours of labor. I was shocked and unable to process what had happened, but I felt like something had been stolen from me. My birth did not have to be this way. Someone, anyone, who knew better than I did should have advocated for me. My birth plan should not have been ignored.

I’m not saying that everything needed to go exactly according to my plan, but I deserved a chance to do things my way, rather than be bullied from false start to exhausted finish.

I needed my doctor to be there for me. I needed someone to give me some tough love, tell me I wasn’t in hard labor, and send me home. My doctor should have showed up for me. My nurses should have known better. My lack of progression and the fact that I wasn’t in excruciating pain during my contractions should have been enough for them to acknowledge the mistake in admitting me, and let me continue on in early labor outside of the hospital, which may have lasted days or weeks. I deserved that.

I could have had the chance to have the natural labor I wanted. There was no need for intervention after intervention, culminating in a baby that was born too soon. I’m not saying that everything needed to go exactly according to my plan, but I deserved a chance to do things my way, rather than be bullied from false start to exhausted finish.

My son’s birth could have and should have been different, but my doctor’s lack of respect for my body and my experience robbed me of that chance. After he was vacuumed out, he was rushed to intensive care for jaundice because his liver was not yet fully functioning yet. Thankfully, we both survived.

Because of my terrible experience, I was no longer trusted my body and my intuition. I second-guessed everything. I felt like it was my fault for not knowing I wasn't in true labor. It was my fault for not being knowledgeable about the medications I didn't want. My fault for not making my demands more adamantly. It took time and two more births to come to the realization that my guilt was entirely misplaced. The truth is, there are things I could have done better, but the fault of my traumatic birth does not lie with me. It's not a wrong that I can't right, because I did the best I knew how. Unfortunately, my doctor didn't do the same.