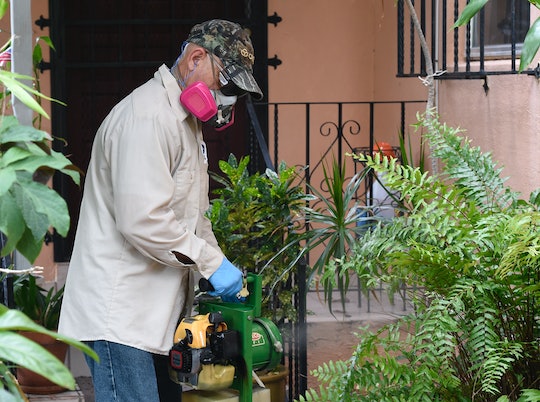 Can You Kill Zika In Semen? The Virus Can Last For Months

Just about everyone knows by now that protecting oneself against mosquito bites is imperative in order to avoid contracting the Zika virus, a sickness that's often mild, but could possibly lead to the neurological disorder Guillain-Barré syndrome in rare cases. But there is another way to contract the virus. Zika is also sexually transmitted, and it's been known to show up in semen months after symptoms subside. So is there any way to kill Zika in semen?

The Centers for Disease Control recommend that men who could have possibly be exposed to Zika abstain from sex or use condoms for eight weeks after leaving a Zika-affected area, and, with an estimated 100,000 Americans attending the Olympic games in Rio next month, that's going to require a whole lot of latex. Men who have actually contracted Zika, according to Slate, are advised to wait a full six months before having unprotected sex. This is a bummer for those who dislike the feel of condoms, but it's an even bigger deal for people who were hoping to conceive a baby in 2016. Maybe we can call Ms. Frizzle and the gang to shrink down and blast the virus, like that time they cured Ralphie's cold?

Unfortunately, right now there's no cure for Zika, and no way to "disinfect" semen. Zika infection during pregnancy can lead to miscarriage, or severe birth defects such as microcephaly. Two babies have already been born with Zika-related mirocephaly in the United States, according to CNN (both mothers contracted the virus abroad). The CDC has also reported three more babies born with Zika-related birth defects, and three miscarriages as a result of the virus, according to The New York Times.

The tricky thing about Zika is that it lasts so much longer in semen than in blood. While it can only be detected in blood samples for about a week, it's been found in semen more than two months after infection. The Lancet has noted that Ebola has been detected in semen up to nine months after infection, so it's entirely possible that Zika could last that long in semen, as well. For now, the only way to avoid Zika in semen, per the CDC, is to avoid said semen entirely, not just during vaginal sex, but during anal and oral sex, as well. As for those who were hoping to get pregnant... Maybe get a cat instead?