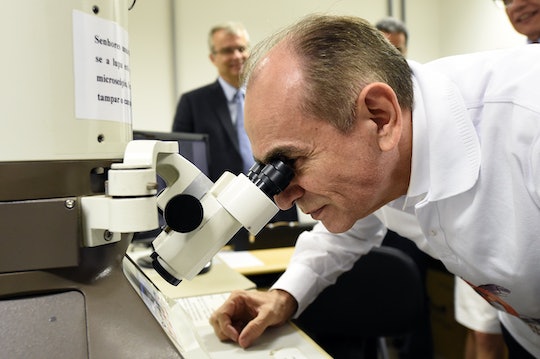 How Long Can Semen Carry Zika? It's Time To Stock Up On Condoms

Although the Zika virus is most often transmitted by the Aedes aegypti mosquito, it's important to remember that it can also be sexually transmitted from infected male partners. Unfortunately, at this time scientists don't know for sure how long semen can carry Zika, but it definitely lasts a lot longer than it does in the blood.

According to PBS, a British man contracted Zika in the South Pacific in 2014 (that's the same strain of Zika that's currently making its way throughout the Americas). The man was studied by Public Health England (the country's equivalent to the United States' Centers for Disease Control), and blood, urine, and semen samples were taken from the patient at regular intervals after his recovery. Traces were still detectable in his semen 62 days after he became ill, long after the virus disappeared from his blood and urine. Public Health England did not grow live samples from the traces, so it's unknown whether 62-day-old Zika still has the potential to infect a partner, but it's really not something one should gamble on. According to The Lancet, Ebola virus has been detected in semen as long as nine months after onset, so it's quite possible that Zika could last just as long.

Unfortunately, this is just one of many unanswered questions regarding the sexual transmission of Zika; scientists still don't know if infected men without symptoms can spread Zika, if women can spread Zika, or if it can be spread through oral sex (although the prevailing hypothesis is that it probably can be). To that end, the CDC has issued some very cautious guidelines for safe sex in the time of Zika:

Bummer, I know. But it's preferable to risking Zika, which can cause a whole host of birth defects, not the least of which is microcephaly. And it's not just pregnant women who need to worry; Zika may also lead to Guillain-Barré syndrome or acute disseminated encephalomyelitis in adults. This is bad news, but it could be worse. There could be half a million people planning on traveling to Zika virus ground zero this summer for a sporting event (the Olympics)... Oh, that's right, there are.