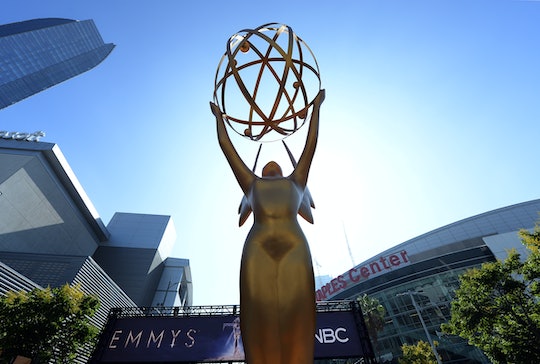 How To Livestream The Emmys Tonight, Because 2018 Has Been A Great Year For TV

If you're anything like me, you've cleared your calendar tonight for the Emmy Awards. But now that the Emmys are just hours away, TV fans who do not own actual TVs are wondering: Can you livestream the 2018 Primetime Emmys? It's 2018, so yes, of course you can! Here's everything you need to know about watching tonight's award show.

Tonight, Monday, Sept. 17, hosts Colin Jost and Michael Che of Saturday Night Live fame will take the stage at the Microsoft Theater at LA Live in Los Angeles. The broadcast starts at 5 p.m. local time for those living on the west coast, and will air live at 6 p.m. MT, 7 p.m. CT, and 8 p.m. ET, according to the Emmys website. The show will be airing live on NBC, and luckily, that means it will be available to live stream on both NBC.com,and the NBC App, as well as Hulu, DirecTV Now, Philo TV, SlingTV, or PlayStation Vue, all by using a TV provider login.

However, if you don't have a login (or your mom/roommate's uncle/ex-boyfriend's cousin finally caught on and changed their password so you can't use their account anymore) have no fear — you can sign up for a free trial of any of the above services, GoldDerby reported.

Additionally, plenty of pre-show and red carpet content will be available to stream. Beginning at 7:30 p.m. ET, the Television Academy (the organization that produces the Emmys) is hosting Emmys! Visit Backstage LIVE!, featuring a behind-the-scenes look at the awards show. You can livestream the half-hour special on the Emmys website as well as on the Television Academy’s Facebook page, according to Deadline.

If that's not enough backstage content for you, starting at 6:00 p.m. ET, Giuliana Rancic and Jason Kennedy will host Live From the Red Carpet on E!, according to the E! News. If you don't have cable or a TV provider login, you can easily tune into E! Stream the Red Carpet on the E! News Twitter page at the same time, where Jeannie Mai, Goreski, and Kristin Dos Santos will be hosting more red carpet coverage

And tonight's show is sure to be an exciting one. So many awesome people are nominated — some of whom could make history. For example, Sandra Oh is nominated for Best Actress in a Drama Series for her role as Eve Polastri in Killing Eve. Oh, who is famous for playing Dr. Cristina Yang on Grey's Anatomy, is the first woman of Asian descent to be nominated in that category.

And even though Jost and Che's primary duties tonight will be of the hosting variety, they could also be winners tonight. Saturday Night Live is up for six awards tonight, including Outstanding Variety Sketch Series. Additionally, five of the hosting duo's SNL costars are nominated for their acting on the sketch show: Aidy Bryant, Leslie Jones, Kate McKinnon, Kenan Thompson, and Alec Baldwin (as a guest star).

I think I speak for all of tonight's nominees when I say: It's an honor just to have my schedule clear tonight so I can watch the Emmys.