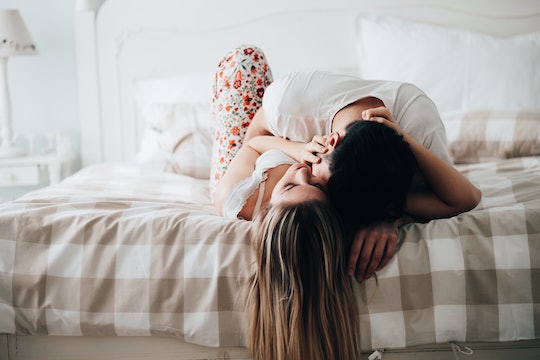 Dr. Kameelah Phillips, an OB-GYN in New York City, tells Romper that an increase in your sex drive can actually correlate with your fertility. "Many women experience a natural increase in their sex drive during the time of ovulation," Phillips says. "This is nature's way of making sure that sperm are waiting for the egg when ovulation occurs. The egg is only viable for 12 to 24 hours, so it makes sense that a women's sex drive is increased during this time to maximize her chances of becoming pregnant."

In fact, the American Pregnancy Association noted that an increased sex drive is actually one of the signs and symptoms of ovulation. If you notice that you're feeling more turned on at a certain part in your cycle (approximately two weeks before your period is due to start), it might be because your body is either gearing up to ovulate or already ovulating.

Biology — pretty mind-blowing, right? It's incredible all of the things that happen so that you have the best chance at procreating. So if your body is telling you yes, listen to it. It might be telling you yes at just the right time. (Unless you don't want to get pregnant and then your body's just trying to trick you.)

More Like This
Yes, It’s Possible To Get Pregnant If You Have An IUD
7 Things Pregnancy Dreams Can Mean If You're Not Pregnant
Here’s What It Means If You Give Birth During A Solar Eclipse
You'll Feel Like A Princess In These Gorgeous New Year's Eve Maternity Dresses