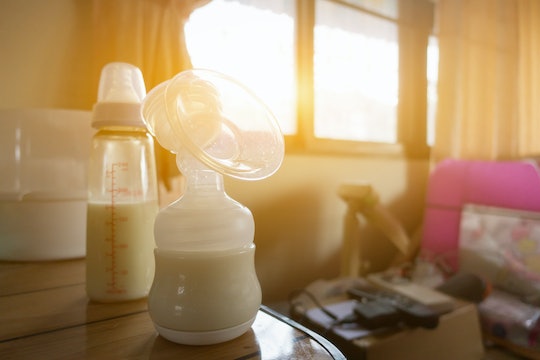 If You're Hoping To Multitask & Pump While Snoozing, Here's What You Should Know

Being a new mom is exhausting. Mothers are the most self-sacrificing beings on the planet, giving up any semblance of comfort and glamour in order to provide for their families — especially if they're pumping. Let's be honest, sometimes it feels as if there aren’t enough hours in the day to do what needs to be done, especially when it comes to sleep. So you may find it even even tougher to juggle a pumping schedule with some downtime. If you're willing to multitask, can you pump while you’re sleeping? I mean, you're making your baby's breakfast while catching up on your Zs. It's pretty perfect, right?

Well, apparently not so much. Romper spoke to International Board Certified Lactation Consultant (IBCLC) Angie Natero, who says that pumping while sleeping may not be such a good idea. “I wouldn't advise that because of the danger to mom for potential injury," she says. While pumping and sleeping may sound like a smart idea, it really could cause you some major physical pain.

While a mom could realistically recline in a recliner, turn the pump on, and fall asleep if she was tired enough, explains IBCLC Katy Linda in an interview with Romper, she should make sure she can wake up to turn the pump off. “She would have to set a timer to wake herself up, or she could damage her nipples," Linda warns. Ouch. Multitasking? Awesome. Getting your nipples caught in a suction for hours as you doze? Not so great.

IBCLC Alyse Lange of Peaceful Beginnings also tells Romper that she wouldn't advise sleeping at the pump. Aside from damaging your nipples, you could also do some damage to your pump, depending on the type you have. "Because some are not a closed system, the bottles could overflow into the tubing and damage the pump motor," Lange says. So along with the pain in your nipples, you've now got a pain in your pocket if you have to end up buying new pump parts, or a new pump altogether.

But even with all of that in mind, damage to your nipples or pump isn’t the only thing you have to worry about. Jennifer Jordan, Director of Mom and Baby at Aeroflow, tells Romper in an interview that she doesn’t think it's a great idea to pump while you’re sleepy because if you fall asleep during a pumping session, you may find yourself waking up to a lap full of spilled milk. “Make sure that you're awake and sitting upright while pumping,” suggests Jordan, “to ensure that you don't spill the milk your body is working so hard to produce.” I mean, you could maybe get over damaged nipples and a ruined pump, but watching all those precious ounces of liquid gold soak yourself and your bed? That's a real tragedy.

If you're not feeling well, or too tired to sit up, you may be able to sleep and pump with some help, suggests IBCLC Tiffany Gallagher of The Boob Geek. “I would be worried about injury or spillage,” says Gallagher, “unless the pumper is assisted by someone else as they might when they are too ill to pump themselves.”

So while it may be easier said than done, you should try to stay awake when pumping. But what can you do to keep yourself alert? Jordan says that when she was pumping, she would watch TV. “I always recorded TV shows, like Real Housewives, which was my guilty pleasure, and would watch them to stay awake while pumping late at night," she shares. You could even use that time to catch up on your email or Facebook, and maybe even do a little internet shopping to keep yourself awake. You can even salivate over the new wearable pump by Willow (it isn’t available for purchase until 2018) that claims you can wear it while walking, exercising, and yes, even sleeping. Hallelujah for modern innovation.

Moms who pump really deserve a lot more credit than they get. The few times I did pump, it drove me bananas. It was hard to just sit around like a cow while a machine pumped milk out me, especially when I just felt like collapsing. So I salute those amazing women who make the commitment to pump for their babies, because they deserve all the applause they can get. (And they also deserve some sleep.)