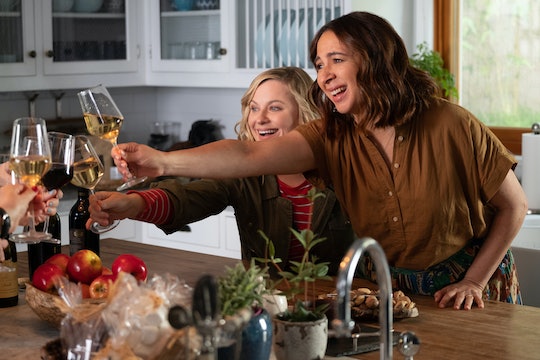 Netflix used to be the go-to place for original shows or catching up on network series that you might not have watched on TV before Netflix bought to rights to stream all of the available seasons. Now, however, it’s also about original movies, including Wine Country, which is Amy Poehler’s directorial debut. But before you watch it from the comfort of your own home with a full glass of wine nearby, you might be curious if you can see Wine Country in theaters first. The movie officially drops on Netflix on May 10, but according to Paste Magazine, it will also be available in select theaters on May 8. Unfortunately, there are no showtimes listed anywhere just yet, but there is a chance that you will be able to watch it on the big screen before you Netflix and chill with Poehler’s new movie.

The movie includes Poehler, Tina Fey, Maya Rudolph, and Rachel Dratch as friends who travel to Napa Valley to celebrate Dratch’s character’s 50th birthday. But when the strict itinerary is thrown out the window (literally), they make it a trip to grow from as friends and as women who are ready to find a new path in life. Wine Country was also inspired by actual trips that most of the cast went on to wineries together, which makes it that much easier to appreciate the humor behind the coming of age movie.

Although some fans might prefer to see Wine Country in theaters before watching it on the small screen via Netflix, you will have to keep a close eye on your local theater’s movie listings to find out if Wine Country is showing near you. Right now, the theater showings seem few and far in between, but there’s also nothing wrong with opting to watch movies on Netflix instead of at the theater.

Poehler recently told Entertainment Weekly in an interview that Wine Country isn't about laughing at older women having a wild weekend away with friends, but more so about how longtime friends really bond in real life. No matter where you are in your own life, I’m sure it’s easy to relate to the bonding experience of the women in the movie.

"I know when I look around my world, there’s all these complicated, funny, interesting, layered characters so it’s not a movie about a bunch of old ladies acting inappropriately," she said. "It’s like, what are the conversations to be had with friends that you’ve been friends with for 20-plus years and what are the stresses and fears and joys and celebrations in that time, because it’s a really interesting time that people either fetishize or they make fun of."

Wine Country follows a group of women who might seem like they have it all figured out, but still have a lot of growing to do. Despite seeming like it is absolutely hilarious with the right comedic actresses from Saturday Night Live, the movie is inspiring for women of all ages to hold onto their lifelong friendships and look for their purpose in life if they feel like something is missing.

Maybe some fans would prefer to watch Wine Country in the theater and I can see the benefits of seeing it all on a big screen, but it’s hard to say which select theaters are hosting the movie before it is released on Netflix on May 10. If the movie isn't playing in your town, then it won't be long before you can re-watch Wine Country on Netflix as much as you want with your own bottle of wine at your side.