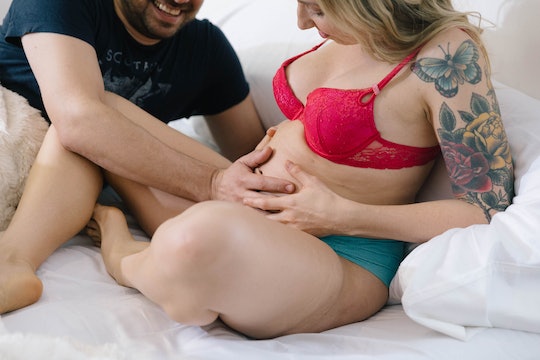 It’s been a long 40 +/- weeks. You can’t see your feet, can’t bend over, and can’t sleep. You feel like you’ve been a gassy, bloated person forever, and you just want a glass of wine and a turkey sandwich, dang it. Plus, you’ve been looking at that sweet nursery for what feels like forever, and you just want your new baby, snuggled in your arms. You’re ready to try anything. You’ve heard eating eggplant parmesan worked for your "mom’s friend’s daughter’s friend when she tried to self-induce, and she went into labor right away." Truly, can you self-induce labor? You’re more than ready to get the ball rolling. But what really works, and more importantly, is it safe?

According to Monique Cowan, who is a birth and postpartum doula and family coach, "If a mother wants to self-induce, she has to be sure she is at least at 40 weeks gestation. The issue with inducing is that, unless a mother knows exactly when she conceived, she may actually be inducing earlier than 40 weeks, and the problem with this is, of course, that [the] baby may not be done with brain and lung development," she says to Romper in an email. "This is why most midwives give a 'due month' instead of a 'due date,' because all women and pregnancies are different, and not all gestation takes the exact same amount of time.”

Cowan says being patient and surrendering to the process is always best, unless there is a diagnosed medical reason to induce.

However, if your doctor, midwife, or doula says it’s OK, Cowan suggests that some women can induce labor through movement, including squats, dancing, lunges, bouncing on an exercise ball, and walking.

Another birth and postpartum doula, Liza Maltz, also says physical movement is a great way to try to induce labor, and suggests to Romper that when you’re walking, try to walk with one foot up on a curb and the other on the street so it opens your pelvis, which allows the baby to descend.

Maltz also suggests other movement exercises, including getting on a birth ball and making figure-eights, which also lets the baby descend and opens your hips and pelvis. "Gravity is your friend," she says.

Tired of moving? 20-year, board-certified OB-GYN Allison Hill, author of Your Pregnancy, Your Way, says in an email to Romper that breast stimulation, and applying warm compresses to your breasts three times per day, is most helpful in women with "high Bishop scores." A Bishop score is used to evaluate the extent to which your cervix is dilated, the consistency of the cervix, and the cervical position. Basically, how ready your body is to go into labor.

What about getting busy instead of working out?

"Nipple stimulation and sex are more fun ways to induce, as it causes a surge of oxytocin, which causes the uterus to contract," Cowan says. "Having lots of sex and orgasms are great," Maltz adds.

If you’re not feeling up for sexy times at the end of your pregnancy (and who could blame you?), Hill says there are also other ways that could help some women self-induce, including taking 500 milligrams of evening primrose oil (EPO) starting at 36 weeks.

"EPO contains linolenic acid, which stimulates the production of prostaglandins," Hill says. According to the Free Medical Dictionary, prostaglandins are fatty acids that stimulate contractions in the uterus. Hill continues, "While the evidence of [EPO's] effectiveness is only anecdotal, it does appear to be safe."

Cowan and Hill also suggest drinking red raspberry leaf tea, though Hill believes it helps decrease the second stage of labor, and doesn’t necessarily induce labor initially. "[Red raspberry leaf], used safely since the sixth century, is thought to prepare the uterus for labor," Hill says. "However, studies show it has little effect inducing the first stage of labor, but may help decrease the length of the second stage by up to 10 minutes."

One common self-induction myth you must definitely avoid is taking castor oil, according to Hill. "Castor oil is a laxative that stimulates the production of natural prostaglandins, however, it also brings on diarrhea and nausea," she says. "No formal studies have been conducted on its ability to induce labor, but it definitely will keep you in the bathroom for most of the night."

Being pregnant is definitely tough, and by the end of it, you’re more than ready to have your body back again. So as long as you are at least 40 weeks along (and you’ve discussed your plans with your healthcare provider), there’s no harm in trying to give your baby a little "nudge" in the right direction of coming into this world. Just be safe, listen to your medical/birthing team, and your body — and definitely don’t take castor oil.

More Like This
Dealing With Postpartum Back Pain? Physical Therapists Share Their Tips
20 Baby Names You’ll Love If You Love Hazel
Gaelic Boy Names You Won’t Hear Every Day
22 Zesty “Z” Names for Boys
What Parents Are Talking About — Delivered Straight To Your Inbox