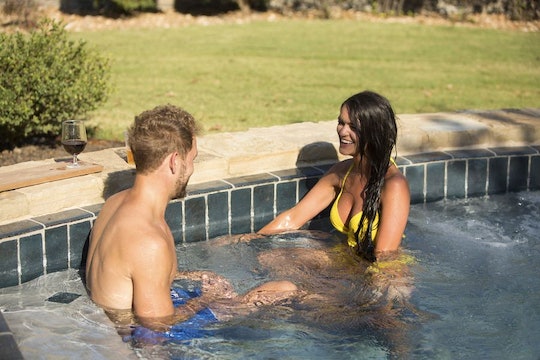 It's been very refreshing that there were so many small business owners on The Bachelor this time around. There are food truck owners, and nail salon entrepreneurs, and one woman, Raven, owns a clothing boutique. It's hard to get to California to show up at Danielle L's salon for a pedicure, so can you at least shop at Raven's store Grey Suede? It's in Jonesboro, Arkansas, but if you can't get down there to show one of this season's finalists some love, you can shop the store online. And right now (likely capitalizing on Raven's success on The Bachelor and why not?) you get 25 percent off your first order if you just sign up for an account.

I don't know about you, but that sounds like a deal. The store also has a strong social media presence on Instagram and Facebook, so if you're on the fence, you can follow them for style inspiration. The store's merch — which ranges from boots, jeans, casual and formal dresses, and even jewelry collections — has a very "Raven"- vibe to it. There's a lot of sparkle, suede, and animal print involved, but in a very laid back, not too "girly way (not that there's anything wrong with being too feminine).

There's something for everyone in the shop for sure. The store's story is an inspiring one. It says on the website that the store "is continuously evolving and growing. We embrace change around here. Staying stagnant is just not our style, but taking risks are — Just like our owner, Raven Gates. At the age of 24, after a year of Law School, and the devastating news of her Dad being diagnosed with lung cancer, Raven had a "come to Jesus" moment."

Instead of carrying on with law school, Raven apparently realized that life was too short to be only a little bit into something, and her true passions are "fashion" and being a "Girl Boss." So she started the boutique with just $1,000 to her name and business has been booming ever since. In just a year, the store was doing so well that she's now employing 10 women to run the store and the biz (which was probably very helpful when she was filming her quest to win Nick Viall's heart).

According to the site, Raven's story has helped "young girls all over Arkansas believe that [they] should never be limited by where [they] come from, what [they've] been through, or how much money [they] don't have."

And you can always use another pair of leopard print ballet flats, because life is way too short to be boring.