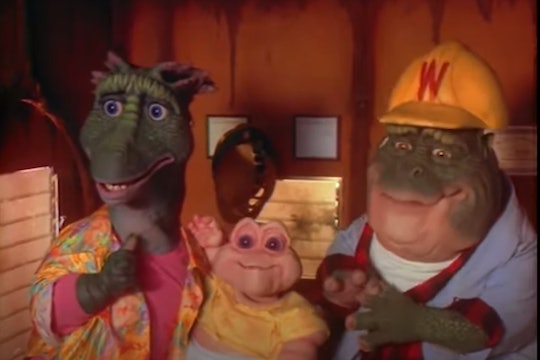 90s Classic 'Dinosaurs' Is Reportedly Making Its Way To Disney+

There is such an appetite for 90s nostalgia, it seems almost impossible that the Sinclair family has not been snatched up by a streaming service yet. Yet being the operative word. If you've been wondering if you can stream Dinosaurs anywhere, I have a good and bad news situation coming right at you.

So the bad news is that Dinosaurs, the early-90s animated sitcom about the Sinclairs, a family of dinosaurs living in 60,000 BC in a place called Pangaea, is currently not available as part of a streaming package. While the show was available on Hulu for a time, according to Vulture, it was taken off the streaming service.

Here's the good news: Disney+, the new streaming service from the media giant, is reportedly expected to start streaming Dinosaurs some time in the fall, according to Movie Web. Interestingly enough, it seems actor Ryan Reynolds was the first person to mention that Disney+ would be streaming Dinosaurs this fall. Reynolds mentioned the news during an episode of his own ABC game show Don't in June, according to WDW News Today, but didn't offer any further details.

Dinosaurs ran for four seasons from 1991 to 1994, with a total of 65 episodes. The series was created by Disney and The Jim Henson Company and featured an anthropomorphic family of dinosaurs called the Sinclairs; dad Earl, mom Fran, son Robbie, daughter Charlene, and of course the youngest child inexplicably called Baby Sinclair. The characters were all puppets designed by Henson puppeteer Kirk Thatcher.

At the time, the concept of an animated sitcom was extremely rare; The Simpsons had only been released two years earlier in 1989 and was itself just getting off the ground. But Dinosaurs won pretty widespread acclaim, not to mention several Emmys, for managing to walk the line between kids show (thank you Baby Sinclair) and surprisingly sharp political commentary, according to Vulture.

Kids from the 90s will remember the show as part of the popular TGIF Friday night lineup that also included favorites like Family Matters and Full House.

If you're hoping to watch some episodes of Dinosaurs and don't want to wait until it will hopefully be released some time this fall by Disney+, you can always buy Season 1 through 4 on Amazon Prime. Or just wait until the fall. It's only a few months away.