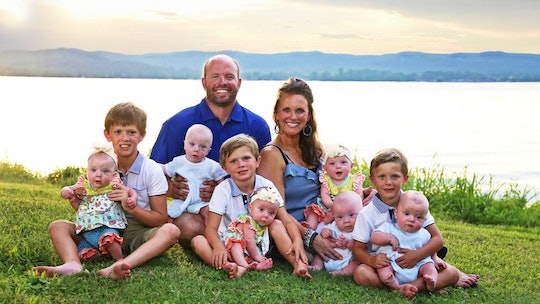 Sweet Home Sextuplets is back for a second season this summer and while Season 1 focused on the trials and tribulations of getting six newborns safely home from the hospital and settled into a routine, Season 2 tackles what happens when those babies start growing. Fans who want to tune in and see how life has changed for the Waldrops may be wondering how to stream Sweet Home Sextuplets Season 2. It just premiered on TLC, so you'll be able stream it on TLC's website as new episodes air if you have a cable provider log-in.

Other options, if you don't have a cable subscription, include purchasing episodes individually on Amazon Prime, iTunes, Google Play, or YouTube as they come out. The series isn't currently hosted by Netflix, Hulu, or Amazon Prime, so you won't be able to tune in via any existing streaming subscriptions you may have.

"We are excited to share this new journey in our lives as the babies are now ‘on the move,'" the Waldrops told People of the new season. "Life has changed a little bit since season one. Our days are nonstop and a lot of fun! With three big boys and six soon-to-be toddlers, there is never a dull moment in our house."

The sextuplets — Blu, Layke, Rawlings, Rayne, Rivers and Tag — turned one on Dec. 11, and celebrated with an angelic gold and ivory photoshoot. They also enjoyed a "ONEderland"-themed birthday party on Dec. 22 and, naturally, TLC was on hand to capture it. Their one-year mark was the focal point of the Season 2 premiere, which opened with the whole family visiting the Huntsville Hospital for Women & Children, where mom Courtney delivered the sextuplets with the help of a 40-person labor and delivery team. It was the team's first time seeing all the babies since they left the hospital.

Meanwhile, the second episode, which airs Jun. 4, wades into some messier territory. As the Waldrops approach their first Christmas with the whole family at home, Courtney grows concerned that their house is becoming too small for a family of 11 mobile humans. With their three older boys, 9-year-old Saylor and 7-year-old twins Wales and Bridge, Courtney struggles to keep the household organized and suggests selling their property in exchange for a bigger house on a smaller plot. Eric is vehemently against it on the grounds that they've made so many memories in what was supposed to be their forever home. He wants to remodel but Courtney finds the idea of a massive construction project even more challenging than what she's already facing.

Then there's the fact that, last season, the family lost their full-time nanny who left to attend nursing school. So Courtney is tending to childcare all by herself this season. Although in the beginning the Waldrops had round-the-clock help from volunteers at their local church, that resource has long since run out. Courtney's strategy to oversee childcare by herself is motivated by saving money, but her overwhelm seems clear as the season unfolds. You can keep up with how the family adjusts as the babies enter toddlerhood when new episodes of Sweet Home Sextuplets air Tuesday nights on TLC.