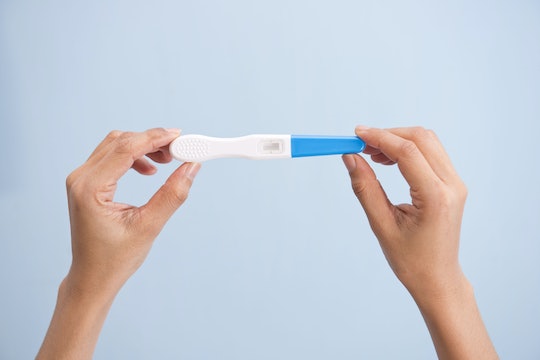 How Taking A Pregnancy Test At Night Affects Its Accuracy

If you’re actively trying to conceive, the "two week wait" after ovulation is the very worst part. For two long weeks, you’re constantly wondering if your symptoms are PMS or early pregnancy. Every cramp, every time you feel tired, and every time you feel like your boobs are sore, you’re hoping and wondering if it’s an early pregnancy symptom. So understandably, you’re counting down the days until you can pee on that stick. But when is the best time to take a pregnancy test to get accurate results? Can you take a pregnancy test at night? How long after ovulation are you more likely to have a positive test if you are pregnant, and not a false negative?

Dr. Sarah Yamaguchi, OB-GYN at Good Samaritan Hospital in Los Angeles, tells Romper you can take a pregnancy test day or night, and it shouldn’t matter. The only time you’d get a false negative is if you take your test too early.

Even though there is a chance your urine is a little more diluted at night than in the morning after it becomes more concentrated overnight, Yamaguchi says home tests now are fairly sensitive and "should turn positive after you have missed your period," even if there is slightly less hormone in it.

"You can do a home pregnancy test two weeks after you have ovulated, but that is still fairly early, and you may want to repeat it in one week if you have not gotten your period and suspect you are pregnant," Yamaguchi says.

How do pregnancy tests work exactly, and what is the most accurate one you can use? As far as accuracy goes, a blood test is the big kahuna of pregnancy tests. They are pretty much foolproof and can detect if you’re pregnant way earlier than a home pregnancy test can, like seven to 12 days from possible conception.

The disadvantages of a blood test are the cost, the inconvenience (it must be done at the doctor’s office), and the time (it takes longer to get a result since they have to send it to a lab), according to the APA.

Taking a pregnancy test at home tests the hCG levels as well, just in your urine. The APA says home tests are around 97 percent accurate when used correctly. Correctly means, among other things, not taking the test too early, which could result in a false negative since the hCG hasn’t built up enough yet. Your body needs time for the hormone to rise to a high enough level, the APA noted.

Even though it’s hard, waiting two weeks is the best way to ensure you have an accurate reading if you’re doing a home pregnancy test, and it doesn’t matter if it’s at night or in the morning. If you’re anxious and have the time and the funds, you can always go to the doctor and have a blood test done to receive accurate and faster results. Good luck, and here’s hoping those cramps are implantation cramps and the fatigue you’re feeling is from a baby growing, not the dreaded PMS.