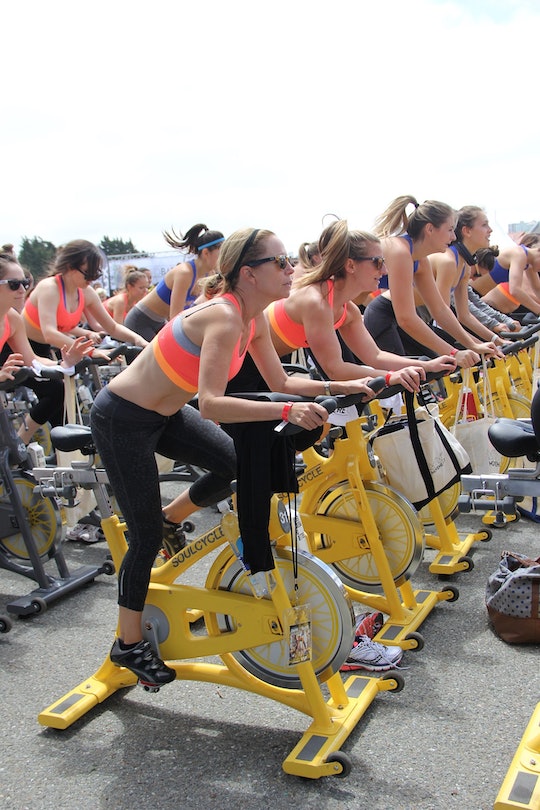 Here's The Deal With Spin Classes During Pregnancy

Unless you have certain medical issues, getting exercise while you’re pregnant is highly advised — especially if you were sticking to a workout regimen before you conceived. However, there are a lot of different schools of thought when it comes to what is appropriate exercise for pregnant women. Most women become a bit off-balance when they begin to show, as their center of gravity is quite different. While there are plenty of cardio exercises and group fitness classes that are safe for pregnant women, including light aerobics, modified yoga, power walking, or light jogging, can you take a spin class while pregnant?

In recent years, spin class has become a popular form of exercise — there’s a TV show on Bravo centered around the popular spin class, SoulCycle, and even Oprah claims the SoulCycle Spin Class is one of her "favorite things." Prevention suggested that the multiple benefits for women who aren’t pregnant include building muscle endurance, low-impact training, heart health, strengthened lung capacity, and of course, burning major calories in one class. With all those benefits, it's understandable to see why pregnant women would want to continue taking a spin class — or begin taking one. Their bodies are changing by the day. Plus there’s the pressure of having a "belly-only" pregnancy, but that’s a different discussion for a different day.

For some fitness instructors, they say to go ahead and jump on that bike, because the benefits for pregnant women are phenomenal.

Tracy Schy is 27 weeks pregnant with baby number three, and she’s the co-owner and master instructor/fitness director of WheelPower Studio. She believes there are benefits to having a low-impact exercise while being pregnant, and spin class is definitely better than running.

"The benefits of a [spin class] is that it’s low-impact on mom's joints and less jostling movements," Schy says in an email with Romper. "The best and biggest benefit to indoor cycle is the ease it will bring mom during both labor and the recovery process."

Schy also believes that when you’re taking a spin class, you’ll have greater stability and balance during your workout, and that other exercises that require more balance become more difficult to do, since with a mom’s growing belly, her balance gets thrown off. "I also have an 18-month-old, and loved cycling as my main form of exercise well into my third trimester, as I found other cardio activities uncomfortable," Schy says. "My doctor cautioned against workouts in a hot environment, like hot yoga, but encouraged me to stay active in low-impact ways that I enjoyed."

Ashley Pitt, a certified personal trainer and group fitness instructor at 24 Hour Fitness, also says in an email with Romper that getting cardio while you're pregnant is totally beneficial, and the low impact on a spin bike is ideal for a pregnant woman. However, she has some additional recommendations to keep it safe.

"I would recommend that women who are pregnant set up on a bike closest to the edges of the room and near a fan, so they get extra air flow. If the room is heated, then they should avoid that class," she says. "Also, women should set their bike up so that the handlebars are a little higher, so they don’t have to bend over too much. In addition, they can also get a gel cover for the seat, for extra comfort on their rear end," she adds. "Definitely don’t want to do too much bending over with the core while riding."

Pitt says that as long as a woman has plenty of water, ventilation, and feels good, it’s safe to take a spin class.

This all sounds pretty beneficial and great, right? And who doesn’t want an easier labor and delivery? However, there are some risks. According to Jennifer Novak, MS, CSCS with Symmetry Performance, it’s important to keep a close eye on your body temperature while you’re pregnant. And it may be harder to do so while in a spin class, because spinning rooms are "notoriously crowded and very warm once the class gets going."

Not all hope is lost, however. Novak, who also has a master’s degree in human movement science and is a certified strength and conditioning specialist, gave Romper a few suggestions that may have similar benefits to a spin class. "To keep core body temperature in a pregnant woman more constant, she could try water aerobics or similar water-based training for a cardiovascular workout," Novak says, noting that the water-based training should be in a non-heated pool.

Additionally, Dr. Eva Martin, CEO & Founder of Elm Tree Medical Inc. says, "As long as you are able to carry on a conversation during the exercise, it should be a safe level of activity," she said to Romper in an email. "At this level of activity, your body temperature won't get so high as to harm the baby (like it could in a hot tub, for instance)."

As always, consult your doctor before jumping into a new exercise regimen or continuing to go hard at the gym once you’re pregnant. Every woman and every pregnancy is different. The most important thing is to listen to your body and know when enough is enough.

More Like This
How To Fly Safely During Pregnancy
Is It Safe To Pump While Pregnant? Experts Weigh In
Is Raspberry Leaf Tea Safe To Drink During Pregnancy?
Is Vape Smoke Bad For Pregnancy? Experts Explain The Risks
What Parents Are Talking About — Delivered Straight To Your Inbox