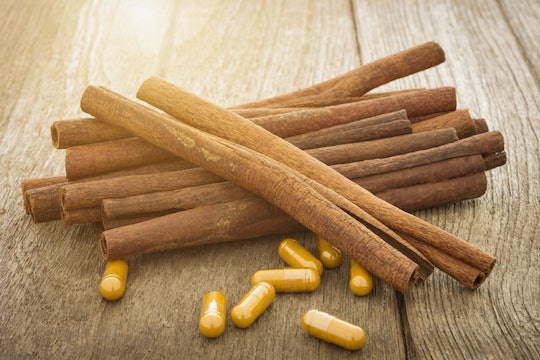 Everything You Need To Know About Taking Cinnamon Supplements During Pregnancy

With the number of scientific studies being conducted on holistic remedies and approaches only growing larger, herbal supplements have been enjoying increased popularity over the last several years. One such supplement is cinnamon, and while it has been used for centuries as a remedy and in cooking, scientists have researched it to find several health benefits. But if you are pregnant, you may know that some herbal supplements are not recommended for pregnant women due to health risks they may pose to the mom and baby. But can you take cinnamon pills during pregnancy?

Romper reached out to Chicago pharmacist Bineesh Moyeed, PharmD, who says if you are eating cinnamon in your food as a flavoring, it’s definitely OK, but if you’re using it as a supplement, there are associated risks. “I would not recommend taking cinnamon supplements during pregnancy,” says Moyeed, “because while there are no direct studies on the effects cinnamon supplements have on pregnancy, there are some indications that it may cause uterine contractions and induce labor, especially in high doses.”

She explains that because each cinnamon capsule is probably packed with a sizeable dose, it may induce labor, and unless you are past your due date and actively trying to induce labor, it’s better to steer clear. For pregnant women, Moyeed says that it’s important to get the green light on any pills you might be taking. “Because even completely natural herbal supplements can cause risks to a pregnancy,” suggests Moyeed, “it’s important to discuss their safety with your healthcare provider before you take them.” She says that if you have a history of miscarriages or other pregnancy-related complications, it’s even more crucial to discuss taking supplements like cinnamon with your doctor first.

With all the numerous suggested health benefits of cinnamon, it’s no wonder that cinnamon supplements have become so popular. I use cinnamon in our home, especially during winter time, to help calm coughs and sore throats by having my family suck on honey-dipped cinnamon sticks. It does seem to help somewhat. According to WellnessMama, cinnamon may have antifungal, antioxidant, antimicrobial, anti-inflammatory, and antiviral properties, while it may also help in regulating blood pressure and blood sugar levels. The website noted however, that while generally people have a recommended intake of 5 grams per day, pregnant women should limit their intake and avoid the use of cinnamon essential oils altogether because of the uterine stimulation it can cause.

Because large doses of cinnamon can activate and stimulate the muscles in your uterus — which can lead to a miscarriage — InfoBaby suggested only using it as a culinary spice in your day-to-day diet, and limiting it to half a teaspoon or less per day. Half a teaspoon of cinnamon is about 3000 milligrams, according to Diabetes Self Management, so because some cinnamon supplements can range from 500 milligrams to 2500 milligram doses, it’s important to gauge how much cinnamon you’re consuming daily.

If you can’t take cinnamon as a supplement, you can still use it in your cooking. Fall is in the air, so fun flavors like apple cinnamon and pumpkin in pies and cakes can use a few pinches of cinnamon. You can even add a piece of cinnamon stick to your herbal tea, or sprinkle some on your decaf latte. I often use cinnamon when cooking my favorite Moroccan dishes, like in these North African meatballs, or this chicken b’stilla. So there are a bunch of ways to incorporate the benefits of cinnamon without the hassle of being worried about taking too much or harming your pregnancy in any way. This way you can have your cake — preferably cinnamon — and eat it too.