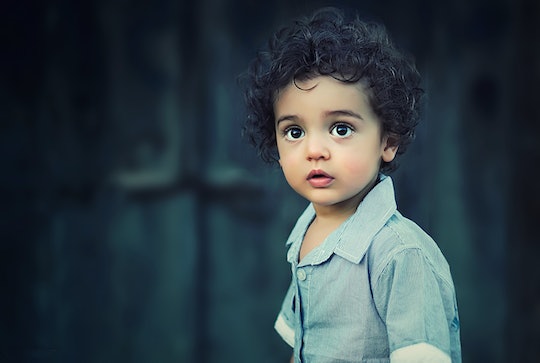 Can You Tell If Your Child Is Lying? Probably Not, & Here’s Why

Let's face it: We'd all like to believe our children are little angels all of the time, but getting into trouble is part of growing up. In those rare situations where your little angel has caused some ruckus, however, you always know when he's lying, right? After all, you've known your kid their entire life, and you've watched them grow into their personalities. You know all of their tells. Except... not really. Recent research looked into whether parents can tell if their children are lying or not, and the results weren't exactly promising.

The Ontario researchers had 72 parents and 79 childless university students watch videos in which 8 to 16-year-old kids "admitted" whether they had cheated on a test or not, and participants had to judge whether the children were lying. Another group of 80 parents watched clips of their own children admitting whether they had cheated or not in a similar video. One would expect that the best group at determining the children's honesty would be the parents watching their own kids, right?

Wrong. What the researchers actually found was that all the participants — regardless of whether they were the kid's parent, whether they were parents judging another child, or whether they'd never had children at all — were equally bad at telling when the kids were lying. All three groups scored just above chance. In other words, most parents may as well flip a coin to determine whether or not their child is lying.

So why are we all pretty terrible at determining when our kids are lying? It comes down to a truth bias. Humans have an innate tendency to believe others, since it helps preserve relationships and keep efficiency motoring along (I mean, how exhausting would it be to constantly second-guess everyone?). As Dr. Jack Schafer explained in a Psychology Today article in 2013, though, you can counter your innate bias by digging a little deeper. Instead of simply accepting your child's answer (and thus, your truth bias) when they say they're "doing pretty good" in school, for example, he suggests asking further questions: "Really? Are any of them giving you a tough time?" Schafer explained why this works:

Subtle skepticism gives the illusion that [you] knew or suspected [your child] was having problems in school, when, in fact, [you] did not know.

With practice, and by simply being aware of the truth bias, you can get better at overcoming it.

Oh, and another thing to note about the Ontario study? It was done using 8 to 16-year-old children — in other words, the kids in it were old enough to have developed some lying faculties. When your daughter and the walls of your house are covered in paint and she says she has no idea how it happened, don't worry: There's no real need to whip out the lie detector quite yet.