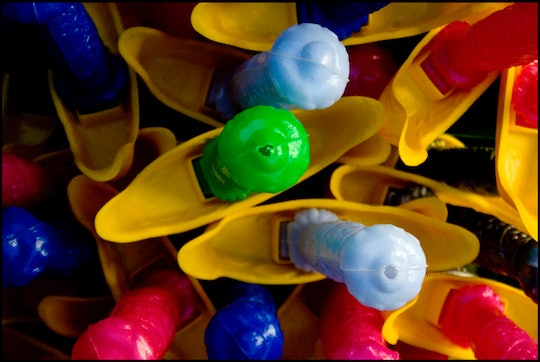 Can You Use Sex Toys During Pregnancy? Here Are 4 Things To Keep In Mind

Pregnancy changes everything, but it doesn't have to completely influence your sex life. As long as your pregnancy is healthy, progressing normally, and your doctor hasn't put any restrictions on you, you can continue to have not only a sex life, but a smoking hot one at that. If you're a woman that likes sex, this is music to your ears, but if you're a woman who likes to experiment with more than just your typical moves in the bedroom, you may be wondering if you can use sex toys during pregnancy.

The short answer? Yes, of course you can. Rarely is anything sex-related off limits during pregnancy. Even rough intercourse while you're pregnant is OK as long as you're smart and safe about it. But sex toys definitely get a green light since, for the most part, they're just synthetic versions of the real thing, notes What to Expect. In fact, you may find that you enjoy sex toys even more than you did before you were pregnant. Obstetric physiotherapist Alison Bourne told Baby Centre UK that women may find their sex toys more satisfying while pregnant because "the increased blood flow to your genitals, along with hormonal changes, can make orgasms with a sex toy more intense."

If you're worried about penetration, it's understandable, but your sex toys aren't going to be a problem. According to What to Expect, it's fine to avoid deep penetration with a sex toy, but your placenta, cervix, and baby are all well protected. If your partner thrusting inside you is safe, then so is your sex toy.

No matter what kind of sex toy you're using during pregnancy, it's still important to consider a few things. While the act of using the toy is safe on your body, there are some precautions you can take to keep yourself even safer.

More Like This
What You Need To Know About Bed Rest & Oral Sex
How Long Does It Take For Sperm To Induce Labor?
I Found Gender Euphoria In My Second Pregnancy
Barre Could Be The Low-Impact Prenatal Workout You Need