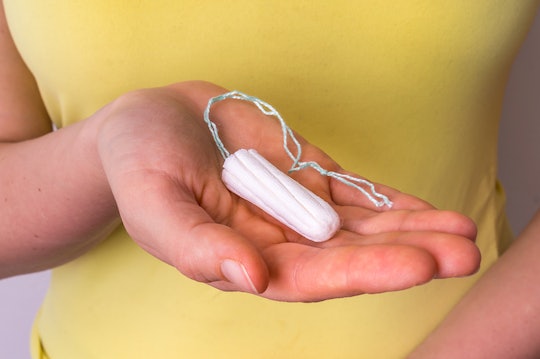 Here's Why Using Tampons As Birth Control Is A Terrible Idea

There are more birth control methods available now than ever before. From IUDs, to condoms, to the many varieties of the Pill, taking charge of your own fertility is easier than ever. Sometimes, though, it's tempting to repurpose everyday products to avoid pregnancy and save some money. Some women, for example, may wonder if you can use tampons as birth control. It's a question that arises online from time to time, so some enterprising souls have at least considered the possibility.

In general, this off-label use of tampons is best avoided. For starters, it isn't effective. According to Planned Parenthood, tampons will not prevent pregnancy in any way. They're designed to absorb blood, not sperm. In fact, the sperm can probably get around a tampon, as noted in Gurl. So if a person has sex with a tampon in and no other method of birth control, then an unplanned pregnancy is still entirely possible. Plus, doesn't the tampon get in the way of a pleasant sexual experience? It provides no benefit.

So in sum: using tampons as a form of birth control is ineffective. You can still get pregnant, and there's a tremendous risk of pain and infection. Why not stick to the more time-tested versions of birth control, and leave the tampons to their original purpose?

Thankfully, there are an abundance of safe, effective, and much less painful means of preventing pregnancy. Hormonal, barrier, emergency, and natural methods of birth control all exist, as well as the long-tern intrauterine devices, according to Options for Sexual Health. Slap on a condom. Start taking the pill. Even try the pull-out method. Just leave those tampons alone when it's time for sex, and save them for period duty only.