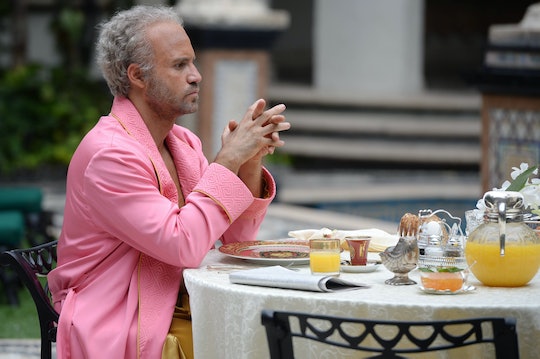 Can You Actually Visit The Versace Mansion?

If Gianni Versace himself isn’t one of the main characters of The Assassination of Gianni Versace: American Crime Story, then his house probably is since it’s the focal setting of the miniseries this season. Present day, the mansion is still standing and remains a testament to its former glory. But can you visit the Versace mansion? The Assassination of Gianni Versace was actually filmed in the original house where Versace himself lived, a feat that reportedly cost the bigwigs behind American Crime Story and FX upwards of six figures.

At a Q&A hosted by the Television Critics Association, Ryan Murphy revealed that it was important to be able to shoot on-location this time around. "The assassination was tough to shoot and we shot exactly on the step where he died," Murphy said, of filming Versace’s death at the mansion, The Villa Casa Casuarina. "He was something special and we paid tribute to him — to all of the victims who in many ways were forgotten and not talked about." Murphy also added: "We were lucky enough to get in there and film that. That’s his bedroom, his closet he built. It is an amazing opportunity to be able to go in there."

Prior to the season’s premiere, the Versace family released two separate statements regarding The Assassination of Gianni Versace. The first, obtained by Entertainment Weekly, stated that "The Versace family has neither authorized nor had any involvement whatsoever," with a responding statement from FX that said they stand by the material used for the making of the miniseries this season. More recently, the Versace family released another statement, further driving home their lack of involvement with the series by calling the source material "second-hand hearsay that is full of contradictions."

The current owner of the mansion didn't exactly make an exception for the filming of The Assassination of Gianni Versace by any means, as The Villa Casa Casuarina is now a functioning hotel that anyone can stay at. Provided, of course, that you have the means to do so. January prices, which aren't even necessarily off-season for Miami Beach, range from $899-$1,299 for a room or suite in the 10 guest room boutique hotel. But if you want to stay there during June, you’re in for a significant increase at $1,399-$1,799 per night for a room or suite.

Since Versace was killed on the front steps of the mansion in 1997, the property has remained mostly the same, with no change in the ornate walls, fountains, and pool that features real gold tiles at the bottom. So you’re paying to stay at a virtual palace in the very spot where Versace himself used to live.

According to the website for the hotel, after going through a few different owners, "In September 2013 Florida business connected to Jordache Enterprises bought the Mansion at auction with a winning bid of $41.5 million." At the moment, it's still a thriving hotel that even has the capabilities to host private events and weddings.

Although there are a number of standard guest rooms, there are also a few signature rooms at the Versace mansion, which is now a bona fide hotel. In addition to the other guest rooms, in honor of Versace’s siblings who once resided in the mansion as well, guests can now opt to stay in what was once his brother Santo’s bedroom and which is now called the Venus room, or his sister Donatella’s bedroom, now called the Signature suite.

So if you decide you’d like to see the mansion in real life after seeing it featured in American Crime Story this season, it's fairly easy. As long as your bank account allows for it.