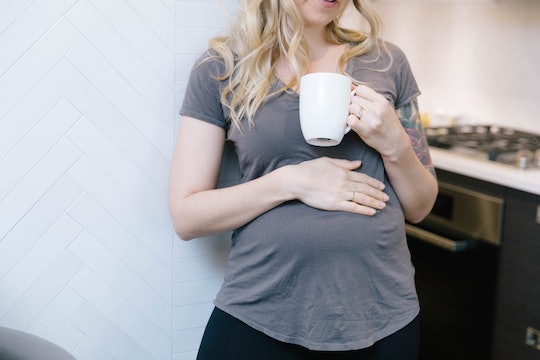 Pregnant women are half the workforce, and losing your job at this sensitive time is potentially devastating for the whole family (I'm guessing you already knew that). The good news is that the courts — and your friendly neighborhood lawyer — know it, too, and federal protections exist for pregnant women. Can your boss fire you for getting pregnant? Nope. Refuse to hire you because you're pregnant? Uh-uh. Can your boss prevent you from taking time off for prenatal appointments? Employment lawyer Dan Kalish of HKM Attorneys breaks it down.

In an interview with Romper, Kalish explains that you're potentially protected on three sides when it comes to your own medical care. Under The Family and Medical Leave Act of 1993 (FMLA), you have a right to take leave to care for yourself, a child, or an unborn child. "FMLA would be the first thing I'd look at," explains Kalish, because any employer who prevents you from taking a medical appointment might be in violation. One caveat: FMLA applies only to companies with 50 or more employees. "The second thing I’d look at is if it’s a small company, less than 50 employees, then it would be a violation of The Pregnancy Discrimination Act (PDA), which requires employers to treat pregnant women the same as they treat everyone else." Like the FMLA, The PDA was established only shockingly recently — in 1978. (So like, what did our grandmothers do?) The logic behind the act is this, according to Kalish:

That sounds fair. But what if you've just been diagnosed with pre-eclampsia, and as a result you're visiting your OB-GYN a smidge more frequently than Joe Smith sees a podiatrist?

Kalish explains that while pregnancy itself is not a disability under the Americans with Disabilities Act (ADA), a complication might be. If you develop hypertension, pre-eclampsia, or any condition as a result of your pregnancy, the ADA will require employers to offer reasonable accommodation. "I would think a reasonable accommodation would be an hour-and-a-half off at 9 to 10:30, to be made up for at 5 to 6:30, for instance," Kalish explains.

According to the Equal Employment Opportunities Commission, the ADA will also protect you if your doctor orders bedrest. The Americans with Disabilities Act became law in 1990, about three years after I was born. (Advice to pregnant time travelers: don't go past 1978 if you know you'll need to work. Also, ask your doctor about the safety of time travel while pregnant, and never time travel within three weeks of giving birth.)

If you're concerned that an employer will fire you for attending your totally necessary prenatal visits — or try to keep you from them — ask your doctor to write a note for each one, and make photocopies. It sounds ridiculous here in 2017 — obviously women need prenatal care — but the written word can offer some protection if your boss slides into '50s logic. You may also have internal protections within your job, according to Workplace Fairness. That means you can consult with your Human Resources department or union representative if you feel your rights are being impinged upon.

OK. So say your boss does prevent you from making it to your 20-week ultrasound, or fires you for those weekly third-trimester visits. Well, what you boss has done is likely illegal, and you now have legal recourse. As Kalish puts it, "We would take that case in a heartbeat."

Kalish recommends finding an employment lawyer instead of filing a claim with a government organization, and notes that HKM alone currently has offices in Denver, Los Angeles, Las Vegas, Portland, and Seattle. By standing up for your prenatal care, you'll also be taking a stand against pregnancy discrimination — which officially makes you a civil rights rockstar.