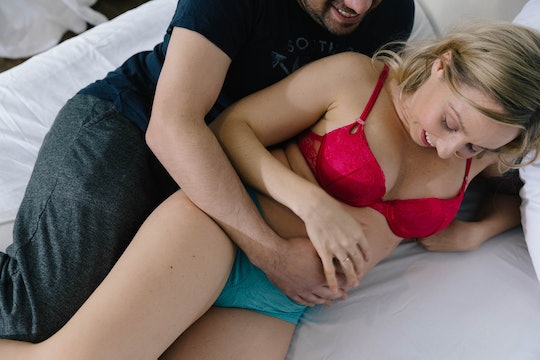 This Is Why Your Breasts Leak During Sex While You're Pregnant

Your breasts are one of the first things that show signs of impending motherhood. They get tender, they swell, and sometimes, they leak. It's strange to think this may happen before you even breastfeed and at inopportune times, like while you're being intimate. Is that normal? Can your breasts leak during sex while you're pregnant?

Having your breasts start to leak may be a bit startling to you if it's never happened before. I know it was for me. Some time near the end of my first pregnancy, my breasts started to swell again, and then? They started to leak. It wasn't like the milk that would come in (by the bucket) after I gave birth, but instead, it was a yellowish, stickier substance that leaked into my bra.

That yellowish fluid that may leak from your breasts is called colostrum, according to La Leche League International, and it's just the beginning of what your body has in store for you later on. This may happen early in pregnancy, or as late as the third trimester. Also, it doesn't happen for most mothers. According to the website, most mothers will only begin to leak breast milk after the baby is born. Does sex exacerbate the leaking? Can your breasts leak during sex while you're pregnant, or is it unrelated?

According to The Journal of Sexual Medicine, it's completely normal for your breasts to leak breast milk during sex while you're pregnant, and that the stimulation of your breasts may amp up the leaking. This is because stimulation of the breasts during sex, as well as the oxytocin produced during intercourse, trigger the breasts to let down milk as they would during breastfeeding, although it's typically not the normal milk of breastfeeding unless you're still breastfeeding while you're pregnant.

However, you have to be careful about how much you stimulate the nipples while you are pregnant, because that oxytocin can also induce labor under the right conditions. Otherwise, a little leaking is nothing to worry about other than maybe a tad shocking at first. It's just one more of the "wait, what?" things about pregnancy. It's no big deal and you shouldn't let it bother you or your partner (even if they accidentally get a mouthful), but if it does really concern you, you can always talk to your provider to make sure everything is OK.