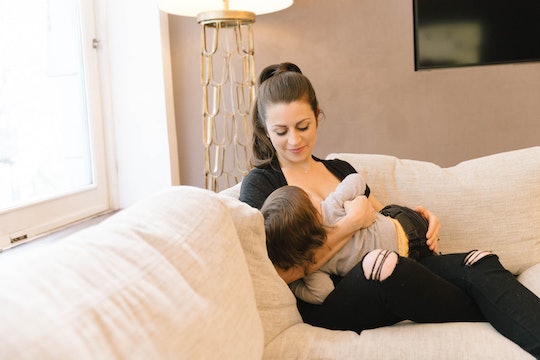 You *Can* Have Multiple Let-Downs While Breastfeeding Or Pumping, & Here's Why

When I first tried to breastfeed in the hospital, my baby wouldn't latch, so the lactation consultant on the floor had me start pumping to make sure I kept my supply. I remember the weird sensation of the "let-down" the first few times I pumped, but not really again after I left the hospital. If you’re a breastfeeding mom, or hoping to try to breastfeed, we’ve all heard the term “let-down.” What does it mean exactly, and can your milk let down more than once? Does it depend on if you’re feeding directly from the breast or if you’re pumping?

According to Helen Anderson, MSN, RN, and certified lactation educator with Fairhaven Health, “Let-down is a casual name for the milk ejection reflex. Most moms, whether pumping or feeding at the breast, experience a let-down reflex soon after the feeding or pumping session begins. When let-down occurs, the tiny muscles in the walls of your lobules contract and force your milk out and down tiny tubes toward the nipple.” As far as whether your milk lets down more than once, Anderson tells Romper, “Yes! Moms can have several let-downs during a breastfeeding or pumping session. The first is usually the most intense and the one most moms feel most powerfully. Having several episodes of let-down helps to empty your breast and keep your baby eating on the breast with a constant milk flow.”

How do you know if you’re experiencing a “let-down” more than once? Though you can’t always feel when it happens multiple times, it does happen. Anderson said many moms feel a tingling sensation near the back of the breast when let-down occurs. “Other moms describe intense pressure or even some pain with let-down. Within a few seconds, milk will begin dripping fast or even squirting from the nipple. Your baby will begin to swallow faster and may cough a little as the volume and speed of milk increases. You will probably notice your milk dripping from your other breast as let-down happens in both breasts at the same time,” she says.

And sometimes, some women have described the feeling as euphoric when it happened. “Let-down is a powerful feeling and can cause an endorphin release along with a milk ejection. Endorphins give us a burst of energy and feelings of well-being, and some moms get a feeling of intense happiness when let-down occurs," Anderson says. "Hormones like oxycontin act on your brain to make you feel relaxed and content when feeding your baby or pumping.”

And since let-down can happen multiple times, it can also happen at super inconvenient times. “The let-down reflex is great for supporting a strong milk supply since your breast is emptying and creating space for new milk to be made. On the flip side, let-down can happen at inconvenient times, causing shirt-soaking milk flow when you least expect it,” Anderson says. “In fact, there are several triggers that can cause let-down when you aren't feeding or pumping. Hearing a baby cry or just thinking about your baby can be enough to cause a let-down, especially early in your breastfeeding journey when you and your baby are still learning about each other.”

So yes, let-down can happen more than once during pumping sessions, while you're feeding from the breast, or even at inconvenient times. Luckily, it's your body's way of releasing all the milk from your breasts so they'll no longer feel full and so your baby will get all the milk they need.

More Like This
Can You Burp A Baby Too Hard? A Pediatrician Shares Tips For Gassy Tummies
Breastfeeding & Sex: Experts Explain What To Expect
10 Baby’s First Christmas Outfits Cute Enough To Save For Their Kids
We Have To Talk About This Fish That Will Pat Your Baby's Butt Until They Fall Asleep