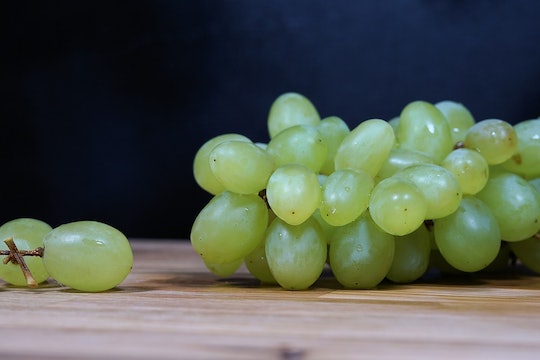 How many times have you given your toddler a snack at the grocery store? Countless times, probably, because it keeps them busy while parents get a necessary task done. It seems like one of the most innocuous things in the world, feeding your child a handful of fruit to keep them settled while shopping. But one family learned a terrible lesson recently, as not all fruits are as innocuous as they seem. After one mom tragically lost her 2-year-old son, she wants people to know that toddlers can indeed choke on grapes so that no one else will have to suffer the loss she has .

According to ABC News affiliate WXYZ, Emma Carver of Detroit was shopping with her son, Ayyan Umar, when he started to choke. She told the local news outlet that she had been looking at some cheese when the little boy helped himself to some grapes she had put in the cart to buy. But, several got lodged in his throat. Carver told WXYZ:

I even threw the cheese down and I started banging on him. But it wasn't getting it out, so it had to be lodged.

She told the news outlet that a shopper became aware that her son was in distress and called 911, while another attempted CPR. Emergency workers reportedly arrived on the scene and managed to get one grape out of her son's throat, but it was too late. Little Ayyan died on the way to the hospital.

According to the United States National Institute of Health, grapes are the third most common food-related choking hazard for toddlers because, as "hard, round foods with high elasticity or lubricity properties, or both, pose a significant level of risk."

Since grapes are small in size and have a smooth, flexible surface, they can easily lodge in a toddler's throat and can be incredibly difficult to remove. In fact, Dr. Jamie Cooper of the Royal Aberdeen Children's Hospital in England told The Guardian that children should avoid eating grapes that haven't been cut in half lengthwise until at least 5 years of age. According to The Guardian, Cooper explained:

It is not just tiny, little kids — we would suggest up to the age of five the kids are more at risk because they don’t chew as well, their swallowing is not quite as coordinated and they get distracted when they are eating.

Emma Carver had another suggestion to share in the wake of the tragic loss of her son: She and Ayyan's father, Mohammad Umar, have signed up to take CPR classes. And they would like to see others do the same to hopefully avoid losing a loved one. As Umar told WXYZ:

I was feeling like maybe it was a bad dream, maybe somebody gonna wake me up. He sleeps on my chest. I see him everywhere.

While the symptoms of someone in distress are typically very recognizable, it's helpful to know that signs of choking in toddlers also include coughing, gagging, and sometimes bluish lips and skin. And for more information on CPR courses in your area, contact the American Red Cross Association.