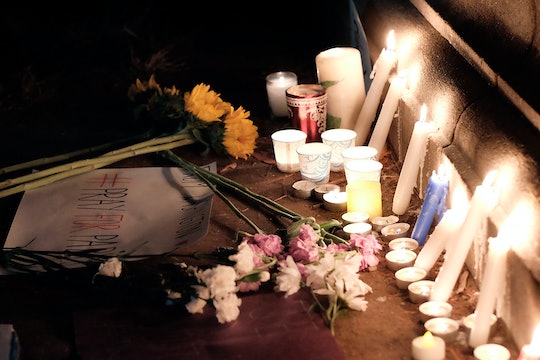 By early Saturday evening, reports came through that the death toll in the attacks on Paris had risen to 129. U.S. ambassador of France, Gérard Araud, called for a candlelight vigil to be held in Lafayette Square in Washington, D.C., according to The Washington Post. The Square, which houses a statue to honor the French Revolutionary War hero Marquis de Lafeyette, was certainly an appropriate location for the gathered mourners to honor the dead.

With 129 dead and an estimated 350 wounded — including 99 who are wounded critically, according to The New York Times — nations around the world are finding their own way to honor those who suffered in the attacks. The vigil in D.C. occurred just around sunset, and it allowed participants, many of them French-speaking, to show support and camaraderie for those across the Atlantic. Emma Brown, a reporter for the Post, painted a stark picture of those gathered:

The White House glowed behind them, but they turned toward the statue of the French Revolutionary War hero, the French Gen. Lafayette. A woman bent to light three candles at the base of the statue as a crowd swelled for a vigil.

At present, French officials have confirmed that the attacks were likely the coordinated efforts of three teams of Islamic State terrorists, according to the Times. Of the attackers, 7 have been confirmed dead, one of them a French national, while others may still be at large. News of international lives lost in the attacks is trickling in. Nohemi Gonzalez, a Cal State Long Beach study abroad student, is said to have been killed during an attack on one of the restaurants. Current reports list one British citizen, two confirmed Mexican citizens, and two Belgium citizens as being killed in the attack, according to The Guardian.

Ambassador Araud briefly spoke at the D.C. vigil, saying that "it is not the time to make a speech." He gave his short comments in French, thanking the United States for its support and saying that "We are not just allies, but we are friends." Following a moment of silence, the gathered mourners sang "La Marseillaise," the French national anthem.

The vigil in D.C. isn't the only way the American capitol has shown its support for France. Citizens have been leaving flowers outside the French embassy, creating a makeshift memorial. Meanwhile, D.C. police have been on heightened alert since the attacks on Paris, although Department of Homeland Security Secretary Jeh Johnson said Friday that there's no known imminent threat to the United States. Still, out of an "abundance of caution," Johnson says the Department of Homeland Security is in contact with local law enforcement throughout the country.

Even as governments worldwide tighten security, the international community has reacted with friendship more than with fear. Monuments worldwide are lit red, blue, and white in honor of France, and tonight in Lafayette Square, the crowd sang "La Marseillaise" one more time before slowly dissipating.