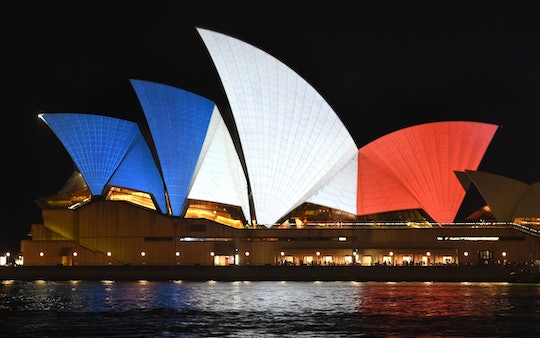 Monuments Lit Up For Paris In Worldwide Show Of Support

Yesterday’s terrorist attacks in Paris were unspeakably gruesome. But when tragedy strikes, people come together and show their support in all sorts of ways. In the past day, many cities all over the world have lit up national monuments for Paris in red, white, and blue, in a touching move of solidarity. Using lights to honor the attacked and the survivors is almost instinctive and with social media, we’re lucky we can see it.

And of course, if we don’t have a monument to light up, we go to our Facebook profiles. Even as the news was breaking yesterday, Facebook released a filter to add to your profile picture. And then came the hashtags. Parisiens themselves used #PorteOuverte to offer places to stay for people who were blocked from their homes because they were in the areas of the attacks or tourists who couldn’t get out of the airport. In the United States, Twitter users were offering their homes to anyone who was stuck because of a cancelled flight to Europe. Here are some of them:

No lights or Internet filter can make what happened in Paris yesterday less tragic. But it's moving to see that people can come together with some lights for the City of Lights.